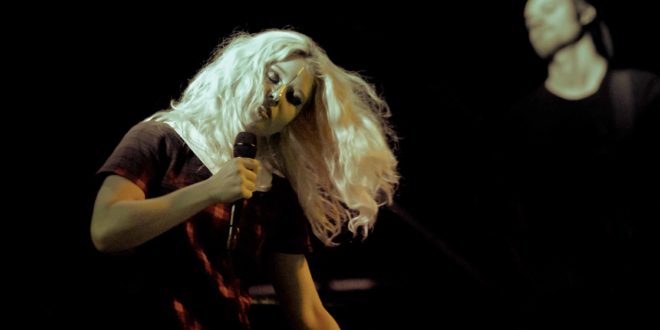 Discovering new music may provide the universe with the only thing even remotely equivalent to blindly falling in love with someone for the first time, as coming across bands and musicians that one had little to no previous knowledge of can often times induce the same breadth of emotions that drifting aimlessly into another soul’s gravity can produce at times.

Earlier this summer through sheer luck, and hasn’t some of the best loves we’ve all experienced in this world come about via happenstance, I was introduced to the surreal, thought provoking and awe-inspiring electro-pop outfit Transviolet while on assignment at the Music Hall of Williamsburg in Brooklyn, NY.

Transviolet’s performance on the evening was both intoxicating and beyond transfixing as the band comprised of Sarah McTaggart (vocals), Judah McCarthy (guitar), Michael Panek (bass and keys) and Jon Garcia (drums) mesmerized the New York City area audience with their blend of deeply emotionally and ethereal music that seemed to literally bewitch the audience members one by one.

Following Transviolet’s set I was able to catch up with McTaggart to briefly chat about what had just happened on stage as well as a few other non-musical related topics which included of all things a discussion regarding one McTaggart’s guilty pleasures, HBO series Game of Thrones.

You see that’s one of the most refreshing thing about McTaggart, she’s neither uptight nor pretentious.  Instead she’s a sublimely talented artist that isn’t afraid to be bold, exude confidence and to be brutally honest. whether she’s speaking specifically about the music of Transviolet or if she’s just sharing random musings regarding masturbatory fantasies involving bastards from the North and a woman who rides ancient dragons.

Hitting the fast forward button from summertime to present day McTaggart and I had the chance to get together again as she and Transviolet prepare to perform at the historic 9:30 Club in Washington DC next Monday October 24th, opening up for dream-pop band Lany.

I’ve always found one of the most defining characteristics of any band that is going to have staying power in the music industry to be their ability to not allow themselves to be easily defined by any one singular term or genre.

Thus It would be easy if not empirically lazy to label Transviolet as being solely a pop band because should one actually invest the time to take an intimate listen to their music and or attend one of their seductive live shows, you’d likely come away with a sense that there’s many complex layers to Transviolet that beg the listener to dig deeper into their rabbit hole.

McTaggart commented, “It’s always so hard to say what genre of music you play so I guess it’s easy to say we’re pop but we actually want to take that word back because it didn’t use to be a dirty word.  The Beatles were considered pop at one point, hell Nirvana was probably considered pop as much as they loathed it but pop just means you’re able reach a broad audience and that lot of people can relate to your music.  That’s not a bad thing, however, as far the production of our music goes, there’s something a lot deeper that we think we’re providing.”

When any young band begins to garner some national and international attention it’s inevitable that many will be quick to draw comparisons.  Personally I don’t think I’ve come across any electronic band that sounds quite like Transviolet, however, the music industry and fans alike have been quick to author up similarities between Transviolet’s music, most often to rising pop star Halsey.

“I don’t mind comparisons because it gives people a chance to compare our music to something they may like themselves.   I wouldn’t say a direct comparison to someone like Halsey is spot on but I wouldn’t shy away from saying that if you like Halsey you’d probably like our music. In some ways there are some similar elements of production between her sound and ours but obviously our lyrical content and our sentiment musically is very different,” McTaggart stated when asked about Transviolet being compared to Halsey specifically.

Electronically driven music can often times sound brilliant on record but when it comes to live performance the music on stage can frequently come off as being too staged, pre-produced and even boring, as without all the bells and whistles a studio environment can provide, far too many electronic bands simply aren’t musically talented enough to translate their recorded music to a live setting successfully.

Musing on this particular topic McTaggart explained, “It did take us a while to figure it out. Part of the challenge was there are a lot of sounds going on in our music and there’s only four of us, so we asked ourselves how are we going to make this work on stage?   Mike and Judah both play two instruments on stage where Mike is playing his bass and a synth that serves as sort of a sub-base, while at the same time Judah is playing his electronic guitar and a thousand pedals that emulate some of the synth sounds that can be found within our recorded music.”

Finishing up her thoughts on the subject matter McTaggart went on to say, “A lot of electronic bands throw everything into the track, which can sound really big but I feel like you can lose some of that energy when you try to perform those overly produced songs live and I just think that there’s something really exciting when an audience can actually see what’s being played.”

Beyond a shadow of a doubt what has and will likely continue to separate Transviolet from the countless other pop oriented electronic bands out there today is the fact the level of musicianship in the band, combined with their incredible chemistry, is superlative to the degree that it easily allows the four-piece to raise the level of their recorded music to new heights when performed live.

“We have this symbiotic relationship about us so everything I don’t have they have and vice versa.  So my strengths are lyrics and vocal melodies. The guys, they do every single bit of production and I only really play ukulele, piano and guitar and not really well,” McTaggart explained while belting out a huge laugh.

Commenting further on her bandmates McTaggart went on to say, “Mike is the main producer and he was the first person to help me record my vocals. Judah and Jon are also great producers in their own right.  Jon’s sense of rhythm and drums tones are just so perfect.  He can sit behind a drum kit, pick out a beat and take my vocals and the emotions I put into my lyrics and turn them into something transcendent.”

Finishing her thoughts on the topic McTaggart concluded, “Judah has this amazing ability to pick out unreal guitar tones while also having this unbelievable sense and understanding of music theory.  He’s the one person out of the four of us that actually went to school for music.  He can come up with some really interesting changes and his contributions can make our stuff really weird in a good way.”

“Mike on the other hand has this innate sense for the dynamics tied to any particular track as a whole.  He can easily sit back and say these things are working here but we need to take this or that away and he also has this amazing ear for picking out synth tones and creating unique synth melodies.  Mike’s also an incredible guitarist by the way even though he plays bass in the band.”

It’s seems everyone from Katy Perry to Harry Styles to just about any individual I’ve personally met that has discovered Transviolet’s music is chomping at the bit for the band to release a full length effort, however, McTaggart indicated that currently the band is taking a unique if not pragmatic approach to releasing new music.

McTaggart explained, “We had this whole kind of album finished but listening back to the body of work it just felt very one sided.  It had all this optimism and these idealistic thoughts about changing the world and I still feel and believe in those things but there was a side missing.  The side of self doubt and how you’re going to make things happen and how am I going to be able change the status quo if I can’t even feed myself. So I wanted that side of the story to be told and with that idea we started writing these songs and when we started with that approach all of this new material began pouring out of us again.”

McTaggart continued to expound on the topic of how the band is approaching releasing new music stating, “So we’ve written a bunch of new material recently and now we’re trying to figure out how to best go about releasing it. I feel like in this musical climate as much as there are these music lovers who are crazy about you and want to hear a full length record, singles seem to almost be a way of beating the system because you don’t have the expectations of a new record and people are just excited to hear your new music.  I feel as though you can almost get away with putting out as much new music as you want to with singles and that’s always our end goal anyway, to put out as much quality music as we can in as timely a manner as possible.”

The sky seems to be limit in terms of where McTaggart and the boys in Transviolet can take their music.  Should you remain unconvinced I suggest, or better yet I challenge you to come out to see the band alongside Lany this Monday October 24th at the 9:30 in Washington DC.  Who knows you could run into Sarah before or after the show and maybe if you’re lucky enough she’ll share some more of her additional television inspired masturbatory fantasies with you.

At the very least I will make this one guaranty, if you don’t walk away from Transviolet’s live show spellbound, emotionally exhausted and just plain happy, perhaps great live music just isn’t your thing.  At the end of the day you may just be better off going home and playing Magic the Gathering while listening to Maroon 5.

Robert Forte attended Northeastern University in Boston, MA pursuing a degree in journalism with a concentration in public relations. After working in print journalism for United Press International in Beijing, China and returning to the U.S. to work in corporate public relations he moved into technology sales. Robert currently resides in Asheville, NC where he now co-owns a start-up technology sales company. Additionally Robert serves as the Music Editor for AskAsheville.com while also serving as the principle in-house concert photographer for the three main concert venues located in downtown Asheville. Robert has been writing and doing concert photography for various media outlets for the past twenty plus years in an effort to support all genres of music and his on-going passion to continue to bring great content to music fans across the United States.
@bruins7140
Previous LAMB OF GOD to Release ‘The Duke EP’, Featuring Two Never-Before-Heard Songs and Three Live Tracks
Next Review & Gallery: Coheed and Cambria at Starland Ballroom, Sayreville NJ 10.15.16 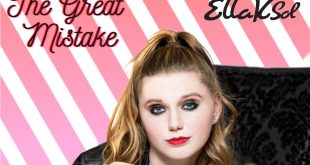 ELLA K SOL DEBUT EP HELLO MY NAME IS TO BE RELEASED ON FEBRUARY 19, 2021 VIA CEN/THE ORCHARD

LUDOVICO TECHNIQUE has released their newest single, “Live as Myself.” Reflecting on our current times, this …