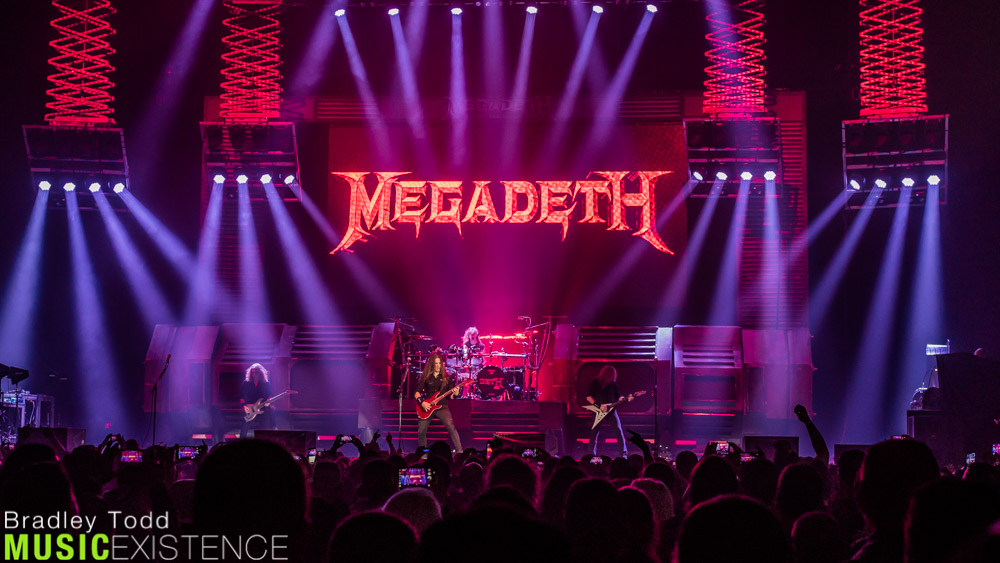 In a seemingly pop, country, and hip-hop/r&b world, who is keeping the metal banner flying? Look no further than thrash stalwarts, Megadeth, who are definitely doing their part.

In the past year, the band has released a killer, hard-charging, new record, called Dystopia, that not only features classic Dave Mustaine songcraft and subject matter (i.e. – the cynical questioning of all things that suck…hell, he even named the album Dystopia, defined as “an imagined place or state in which everything is unpleasant or bad, typically a totalitarian or environmentally degraded one.”), as well as the guitar wizardry of new recruit, Kiko Loureiro, but they have put together a huge metal roadshow of a tour featuring four other bands: Butcher Babies, Metal Church, Suicidal Tendencies, and Amon Amarth.

Megadeth is rounded out by longtime member and bass player, Dave Ellefson, and new drummer, Dirk Verbeuren, formerly of Soilwork, who joined the band officially around July 2016 for the Dystopia tour. The current lineup resembles past lineups, in that it is exceptionally talented and exceptionally tight, performing on this night with power and precision that many bands can’t match.

Showing Megadeth’s pride in the new record, the setlist (see below) was weighted in favor of Dystopia, with seven of the seventeen songs coming from it. The rest of the set consisted of classic hits spanning the band’s lengthy career. Their stage was a mix of futuristic metal and lights that matches the cool Terminator type vibe of their new album cover, perfectly setting the stage for Vic Rattelhead’s appearance towards the end of the show.