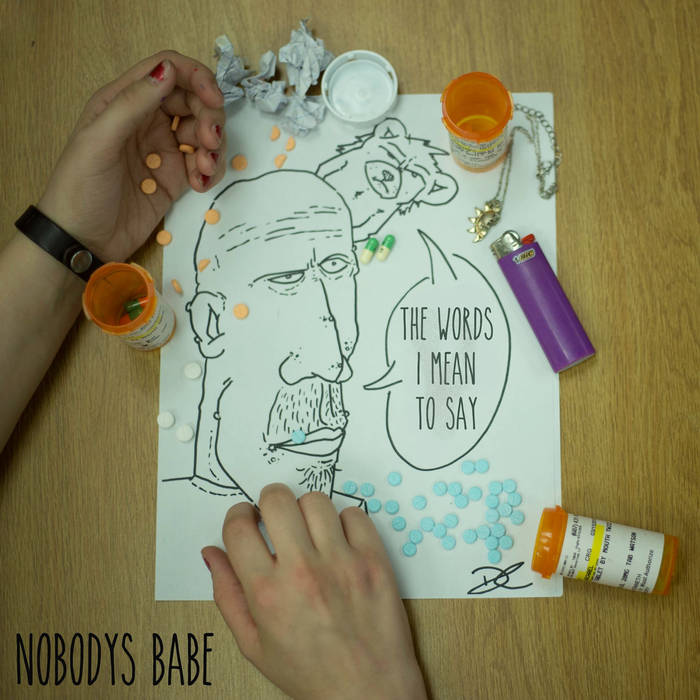 Album Review: Nobody’s Babe: The Words I Mean to Say

Nobody’s Babe, aka Rachael Soluri, wrote The Words I Mean to Say after she exited inpatient therapy and the result is an album that is so honest, sometimes screaming with pain, that one can’t help but praise Soluri for putting all of herself into the record and being brave enough to share it to an audience comprised of mostly strangers who are unaware of her story.

On “Aquarius,” Soluri puts her best foot forward on a strong ballad which really showcases her commanding and powerful voice. The light piano instrumentation is in contrast to the mournful lyrics as she sings about someone who has left her and has hurt her deeply. Wounds may heal over time but right now, on this tune, Soluri allows herself to wallow while still having a little glimpse of hopefulness in her mindset as she sings “I’ll see you around.” At under three minutes Soluri is able to tell a full and complete story never shying away from her feelings and it is those heartfelt and raw lyrics that carry this LP. There’s nothing flashy here, no bells and whistles, just a piano and Soluri’s soulful voice and that stripped down feeling is what makes “Aquarius” so much more meaningful

“All of Me” has a total country pop vibe to it, complete with a jangle and pep that is unmatched. Soluri talks about not being able to “find the line between friends, loves, and enemies” and it is the best lyric on the entire album, again truthful and something that lots of listeners may be able to indentify it. The subject is definitely a complicated situation but Soluri manages to cover the topic in a very short amount of time and that is the sign of a great singer/songwriter. When Soluri comes to her realizations on any given matter she doesn’t stretch out the topic, instead she packs a punch by forcing her audience to listen carefully because what she is trying to get across will go by very quickly. It’s a bit of a throwback to the days when songs were mostly short but still carried weight. The sound is new for Soluri and it suits her fine and while it is a bit of a different genre of music it shouldn’t alienate fans, instead it showcases the many different musical hats that Soluri can wear and that should make listeners happy.

The most effective track on the entire LP is “20 Mg” in which Soluri is completely vulnerable, almost screaming and pleading for help about her current mental state. “I don’t want to be the one to teach myself to breathe again,” she wails and one can’t help but feel her pain in the situation. The chorus is catchy but it doesn’t take away from the serious content. “I’m so sick and tired of taking 20 mg just to get by/if this is the way I have to live I think I’d rather die,” Soluri candidly admits in a powerful statement. One can hear the frustration and sadness in her voice on the brink of a certain kind of madness. Putting words to a song and releasing it to listeners is almost always a personal experience, and probably a pretty frightening one too, so the fact that Soluri can put her life out there, mostly the messy bits, with such bravery is something to commend. And it’s bound to help someone who is feeling the same way going through the same experiences.

There are some shortcomings on the album such as “Bruises” which feels underproduced, “Natural Disaster” which drags despite the fact that it is only a three minute song, and “Billy Joel,” which is all over the place musically. But combined with the better tunes the record is still one this reviewer urges you to listen to because what Soluri has to say is important, and it just might save a life.

retro music enthusiast. Dreamer. Kind of odd. Writer
@twitter.com/for_no_one1014
Previous Album Review: Fit For a King – Deathgrip
Next The Story so Far Debut Video for “Nerve” Ahead of Tour with Good Charlotte