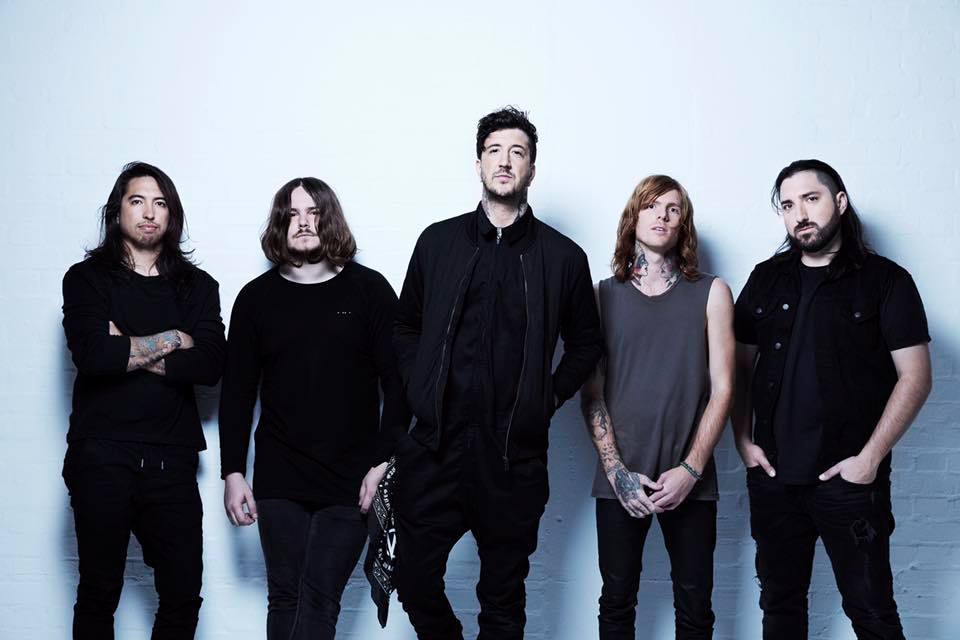 When I asked Hands Like House what we could expect from their show they said “just a bunch of dudes rocking out” and boy, did they. I made sure to give them a listen before the show and I really enjoyed their music but they are a band who are even better live than on record. Lead singer, Trenton oodley brings so much energy and charisma on that stage and not a single member of the band was just standing playing. Every single member rocked out hard and the crowd really enjoyed them as well. An array of fists up in the air. Every single song seemed to effortlessly segway into the other weather it was musically or with a little bit of speech. Their music style is something I love. I enjoyed it so much and their atmosphere made me feel like coming back to another show would be nothing but fun and games and great music.

Getting to see the guys in Crown The Empire again was a treat to the ears and the eyes. Andy came out in the smart blazer and skinny jeans, just looking the epitome of suave and sophisticated front man. Even without Dave, the bands screamer, Andy stepped up his game an the set list was perfect. I honestly cannot fault this band one bit weather it’s energy, atmosphere or the music. They were perfect. Usually you notice a lot of fancy guitar in a lot of bands live performance but a special props to Crown The Empire‘s drummer Brent Taddie who absolutely tore it up. One of my favourite songs from my scene phase was “The Fallout” and you can imagine my delight when I heard the opening drum beats and I was transported right back to my EMO days and it was amazing. Every single thing about this band was just incredible. My personal highlight of the show was them encouraged someone to crowd surf them some shots which if that isn’t one of the most rock and roll things I don’t know what is. “Machines”, a perfect end to show, a big final sing along and a pit opening up in the middle of the crowd, crowd surfers and people up on one a others shoulders. Absolutely incredible.

Glasgow’s infamous “HERE WE FUCKING GO” chant echos around the building; wouldn’t be a Scottish gig without it. The chant matched with dramatic entrance music and lights flashing, Of Mice & Men emerged one by one, waiting for the main man himself. Austin Carlisle. Who came on in the exact manor I expected, a cocky swagger. Surveying the crowd as a mosh pit open up in the middle of the crowd – I knew this show would be rowdy but this crowd were taking it to a whole new level. There is no denying the talent of this entire band. A frequent song on all my playlists by Of Mice & Men is “Feels Like Forever” and they truly made it one to remember. It was beautifully done, just so perfect. Austin asked the crowd: “In your head, what makes you, you?” A little thought for everyone in the crowd but I think was a good question to put to an audience who will all interoperate a song in a different way. What a song means to one person could be completely difference from the person next to them. That little speech lead beautifully into “Not Giving Up On You”. A song I know means a lot to many of you OM&M fans.

This bands crowds know how to go hard an it’s intense. I couldn’t even dream of the feeling that comes with being in the middle of one of their pits during the set. There was shirts off, sweat pouring off people but so many happy faces. One thing I will say, is this band know how to chill the crowd out and watching Mr Alan Ashby solo his little heart out was beautiful and it built them up to “Relentless”. One of my favourites because it’s one of the heavier tracks and I think this song for me is what this band are about and you can hear EVERY single member of that band contribute to the incredible sound. I had a little chuckle to myself when “The Calm” and “The Storm” were played back to back and both songs just rolled into one another so well. The band do what they do and they make it look absolutely effortless and I think that’s hard but when you’ve been a band as long as they have you learn to perfect the arm of performing.

It was that time. Austin addressed the crowd as we all knew what was about to happen: “this is our last song, we will leave the stage, you’ll cheer and we will come back on and preform a big ones.” and boy did they deliver, a perfect end to an incredible show, Austin dawning a Scotland flag round his neck they came back on the stage and to preform “You’re not Alone” and “Second and Sebring”. To this day one of the songs I really really do love and it was evident the the band put so much passion into that track because for me that’s what made them who they are. It’s their identity and I think a band being defined by a song isn’t a good thing but I don’t think it defines them, it shows that no matter what direction they go in, that song will always be with them. It was pretty emotional to hear it live but one I has always wanted to hear.

19 Years old from Glasgow Scotland, currently studying Radio at City of Glasgow College in conjunction with my own Youtube Channel!
@johnhughxs
Previous Interview: Pamela Hute
Next Interview with Andy Leo (Andrew Velazquez) of Crown The Empire