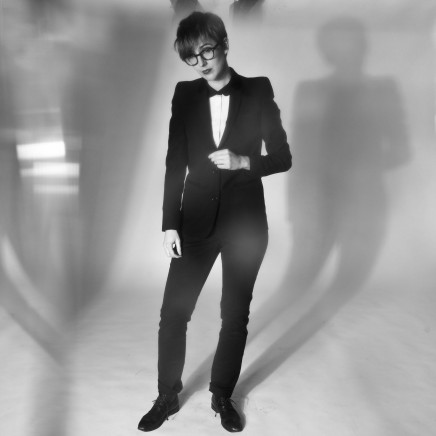 1
SHARES
FacebookTwitter
1. How does being based in Paris influence your music?
Paris is a lively city, I’ve always lived there so I’m not sure it really influences me. My music is about humans and relationships, my experiences, the lives of people I meet, characters in books or movies… so the environment is not necessarily central in my writing. However, Paris is so bloody beautiful and as an artist you can’t really get over such beauty; it’s definitely inspiring.
2. When did you realize that you wanted to go the solo route? How scary was that for you?
I went solo 15 years ago and even in my first band we were playing my songs. That was really a long time ago and we only did a tape or two, it was really a kid’s band!!!
I’m the one behind the songs, it’s my thing. I enjoy having friends backing me up on stage; it’s more than just a solo artist and a backing band. We all work for the songs to make them better.
The solo thing is not really scary. It can be a lot of pressure at times, especially at the beginning of a career when you’re younger, learning and don’t really know how to deal with people and things. Now that I have more experience, I know what I’m trying to achieve. It’s a lot of work but it’s my passion so I really can’t complain.
3. What’s the biggest difference from working with other people (The Mashed Potatoes) to working solo?
You make a bunch of concessions when you’re sharing everything with a band, your bandmates tell you whether this song is good enough or not. I’m not really made for this. Not that I don’t like criticism, if a song doesn’t work and nobody likes to play it I have no problem trashing it. I think it’s good to have a leader otherwise you never get things done. I also have to deal with the doubts alone but that’s part of the game. I write the songs and when we arrange with the band, we focus on the songs only. There is not ego or real concession. Everybody knows when the song is getting better or getting worse. My job is to be sure we keep the initial intention and spirit so it fits my artistic guidelines. It’s not very complicated to do.
4. You recorded your latest album in several different cities around the world. What was that experience like for you?
I mostly recorded in the south of France but yes, I did some preproduction in Paris and wrote songs in NY too. As long as I feel at home somewhere, it’s easy to write and record. I don’t like studios that much, except when it comes to mixing or mastering. This is where I believe it’s really necessary to have a solid technical environment.
I did a bunch of traveling when I wrote the record, it was a transition time in my life and I needed to wander in various places. I believe it was inspiring, or maybe I was just running away from somewhere. I don’t know. But there is a road trip feel to this record, for sure.
5. What is the most challenging and most rewarding parts of having your own record label?
It’s still very new. I don’t think about challenges so much at this point but it’s very exciting.
Working for other bands and making them happy gives you a lot of energy for your own projects. It may sound a little cheesy, but helping others makes you look at everything differently. It’s a small label, we release records in very small quantities, it’s all DIY, but it makes a lot of sense. We know exactly how we are doing things and why. When people buy our CDs or tapes or mention it on a blog, it’s extremely rewarding.
6.You are also a producer. What made you want to produce music?
I mostly produce my own records, although this last one was co produced by Jay Pellicci. I didn’t really had the opportunity to work with other artists on a full record though.
I think I have a good indie rock culture and a certain vision of how a song can be made. In my opinion, producing is helping the artist make the message clearer, that’s all. I like the idea that you can guide an artist and give him tools to express himself better. Some don’t need that, but some do. It’s a fascinating job.
7. You are an avid guitar collector. What is your favorite one you own?
Haha, difficult question 🙂
I have an Epiphone Casinon from 1964, and for some reason I’m convinced one of the Beatles used to own it. I have no proof, but I’m sure anyway.
That’s my fav, naturally!
8. You are also a record collector. What is the first and last vinyl you bought?
First Vinyl I ever bought was The Beatles Revolver and last one I just received today was Ultimate Painting’s latest LP, Dusk
9. What has been your favorite album or EP release of 2016?
That’s a really hard question. I bought a bunch of records in 2016…
It’s not an EP or a full length, but the Grandaddy single that came out a few weeks ago is really awesome. I love this band so much and was so happy when I heard they were putting out some new stuff.
The new Cymbals Eat Guitars is pretty powerful too. Also, although it’s pretty far from what I usually listen to I have to say the new Bon Iver is absolutely mind blowing.
10. What is next for you?
Well, the end of the year is going to busy preparing the release of third LP Highline due February 24, and hopefully start touring early 2017.
I have a lot of work with the bands on the label too, trying to develop that as much as I can.