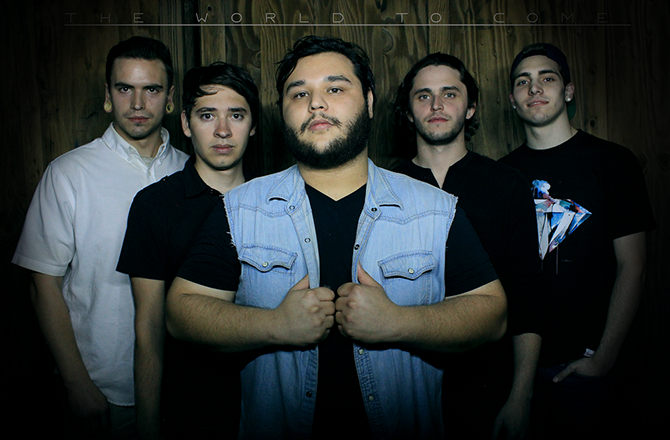 Album Review: The World to Come – The Cartesian

With their latest release, The Cartesian, progressive metalcore outfit The World to Come demonstrate a fascinating focus on ruthless grit combined with airy tone. The band takes clear inspiration from multiple genres including grindcore, prog rock, mathcore, and copious other styles which has given them a distinct sound that is sure to please a wide array of metal fans.

The album’s opener “Dualistic Genesis” is a good summation of The World to Come’s presentation. With deep gutter vocals layered over spacey instrumentals that could occasionally fall under the blackgaze category, this track is a good example of how to properly mix genres together in order to create a fresh sound. Each element floats by with natural precision and as different as every distinction may be, the track never feels too jumbled or messy. The following track “Apotheosis” takes a more traditional deathgrind approach. With frantic percussion, rattling base, and a satisfying blend of low growls and higher pitched screams, the band puts forth a style that could easily be compared to the likes of Cattle Decapitation. Songs like this prove that The World to Come are not only skilled at hybridizing genres, but also putting together more conventional metal performances that work well on their own. Track 4, “Scribe of Thoth,” features some nice, trippy guitar work that might seem theoretically off putting paired with the band’s more grinding fashion, but the diversity in instrumentals once again proves to be a different yet creative piece of art. Track 6, “Temple of Minerva,” possesses some of the most apocalyptic instrumentals on the entire album, showing glimpses of Behemoth on occasion. With glimpses of black metal through its duration, “Temple of Minerva” is one of the most unique moments on the record thanks to its successful incorporation of multiple stylistic elements. It’s tracks like these that show the undoubted talent The World to Come are and how well each member is able to work off of one another.

While the band have shown to be capable of creating a melting pot of genres, there are moments where their more traditional presentation can be slightly bland as the album progresses. Tracks like “Bride of Eros” and “Verdict of Arianrhod” are fine for what they are, though they lack the unique combination of different metal facets like previous songs. Prolonged instances like these can make the listening experience drag due to the lack of texture and flavor that was prominent in earlier portions of the record.

Towards the end of the album however, this flat trend thankfully comes to an end. Thanks to the final tracks “Decadence” and “Monotheistic Revelation,” Cartesian is able to conclude on an impactful note. The longer length of both tracks allows the band to experiment more with their prog elements, which results in some of the more standout instances on the entire project. With fantastically gritty vocal deliveries and grandiose instrumentals, both tracks put together everything that makes the album good. The band proves to have mastered the tactic of transitioning from harsh, grinding metal to euphoric progressive rock in a seamless manner.

No matter what genre of metal an individual listener prefers, The World to Come carry something that roughly any fan of heavy music can enjoy. Cartesian is an incredibly varied piece of metal and its fusion of different genres is not only admirable, but of course delightful to listen to as well. If The World to Come continue down this path, future projects will be highly anticipated due to the unpredictability of what sounds the band will incorporate next. As of now, The World to Come have released a solid metal record that shows a possible bright future on the band’s horizon.

Cain Miller is an aspiring writer who hopes to work his way up and gain notoriety for his material. Having written about film, television, music, and sports, Cain is always looking to gain as much experience as he can and continue to improve his writing abilities.
@cainemiller
Previous Blacktop Mojo Releases Official Music Video For Their Cover Of Aerosmith’s “Dream On”
Next Pistols At Dawn debut ‘Forgone Conclusion’