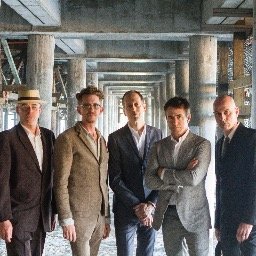 The fourteen songs on Cranky George’s full length debut, Fat Lot of Good, show off the risk-taking and musical expertise you expect from the release going in. However, listeners likely won’t expect that the album’s songwriting does such a clear-eyed job of embodying such a wide range of human emotions. Their talent for this, likewise, seems well nigh effortless. Melodies and layers of music unfold from the band with all the naturalness of a blooming flower and they show off an innate chemistry springing, in equal parts, from deep seated connections, long experience with each other, and the underrated talent for actually listening. The production is exceptional and captures the multitude of musical details Fat Lot of Good throws at listeners while maintaining a balanced approach throughout.

It gets off to a rollicking, even slightly humorous, start on the opener “Tunnel of Love”. Cranky George’s songwriting certainly doesn’t shy away from overturning clichés, but it doesn’t come off as preachy or heavy handed in any way to hear them claim that the tunnel of love is just another lie. The bridge where Cranky George’s narrator becomes confused about the name of his girl of the moment is a particularly effective moment. “Greenland’s Ice” is a straight-forward folk song resisting anything in the way of needless embellish in favor of listeners focusing more than any time before on Cranky George’s lyrical content. Dermot Mulroney takes a vocal turn on another bittersweet, yet slightly tongue in cheek, number “Misery Road”. The music has a stripped back quality compared to some of its predecessors and Mulroney’s dramatic reading does a good job of capturing the lyrics’ inherent sarcasm. The guitar makes its presence much more strongly felt on “Waltz in Blue”, but the real stars here is the form and the sarcasm bubbling just below the song’s surface.

The band takes on some familiar subject matter with “The Man with Burning Eyes”, but their take on this particular songwriting formula never fails to find original imagery to harvest for their own variation on the tradition. The faster pace gives the song a tremendous surfeit of energy. Meditative grace returns with the unsurprisingly melancholy of “The Bones”. It’s one of the album’s best vocals as well, but much of its impact can be traced to phrasing and the careful consideration shown to each word. There’s a light, surprising bounce to the album’s penultimate song “Summer Dress” listeners will simply not find elsewhere. It sounds it wants to come off like reggae or light ska and the unique approach gives the song an unique feel that will find broad=based appeal.

There isn’t a single second of filler on Fat Lot of Good. Cranky George works together to craft a powerful fourteen song collection that alternates between light, darkness, playfulness, and despair without going too far in any one direction. The participants have carried on in grand fashion with their own esteemed musical pedigrees and Fat Lot of Good adds another feather to their collective and individual caps