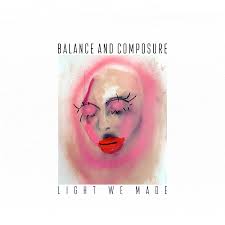 Album Review. Balance and Composure: Light We Made

Balance and Composure’s Light We Made, out Oct 7th, does not have much of a balance to it. But that doesn’t stop the album from being enjoyable and something fans will devour once released.

“Midnight Zone” starts off the whole LP experience and it is one of the most memorable songs on the album. It’s experimental with spoken word being layered over instrumental, and when the lead vocals kick in with an ethereal feel one can’t help feel that its sound is at home in a retro 90s sort of way. Echo like effects on the vocals contribute to the hazy vibe the song has going for it, and listening to it is akin to the feeling of floating away from all of one’s troubles. It’s unlike any other tune on the album, very easy to listen to, and just flows naturally without ever trying to too hard. Though it’s not the most catchy tune it is infectious in its own unique way and gives listeners a great first track to revel in.

The best song to be found on the record is “After Party” which has an uptempo, peppy feel and also comes across as more mainstream and radio friendly. Again the 90s vibe is strong feel, drawn out vocals over faster paced instrumentals. It’s the type of tune that will immediately get stuck in one’s head, especially the chorus, and the driving drum beat helps the song move along at a brisk pace which also is one of the most commanding parts about the tune. Feeling authentically retro Balance and Composure put their best feet forward here, displaying a different side to the band that is heard nowhere else on the album, and that contributes to why it is so good. The content is also something that can be extremely relatable to listeners with great visual lyrics and it makes it something that an audience can jam to while still connecting with the song on a more personal level.

“Loam” ends the album on a deep note with the lead singer wailing “I feel like I can never get away even if you call I’d be getting in the way.” It’s raw and honest and when these pure alternative vocals are placed over a harsher and darker instrumentation,a hazy layer of musical fog looming over the entire track, the tune rises as one of the great treasures to be unearthed on the album. There’s a fullness here to the tune that is lacking on some of the other songs, produced superbly bringing all the elements together to create a slightly industrial feel while still maintaining a straightforward alternative song which is nice balance especially when compared to other tracks on the LP.

The main problem with Light We Made is that mostly everything sounds the same, rarely giving the audience anything new to consume. Yes, one can also look at it and see this as an easily flowing album, but perhaps it blends too seamlessly because with the exception of a few tracks it is very hard, especially upon a first listen, to distinguish each tune and separate them from the rest of the pack. It also doesn’t help that some of the lyrics are so unclear that at times it becomes distracting. Still, after a few listens those problems slowly start to vanish so don’t lose patience. Press repeat and find the joy in the album.

Tags Album Review balance and composure light we made music