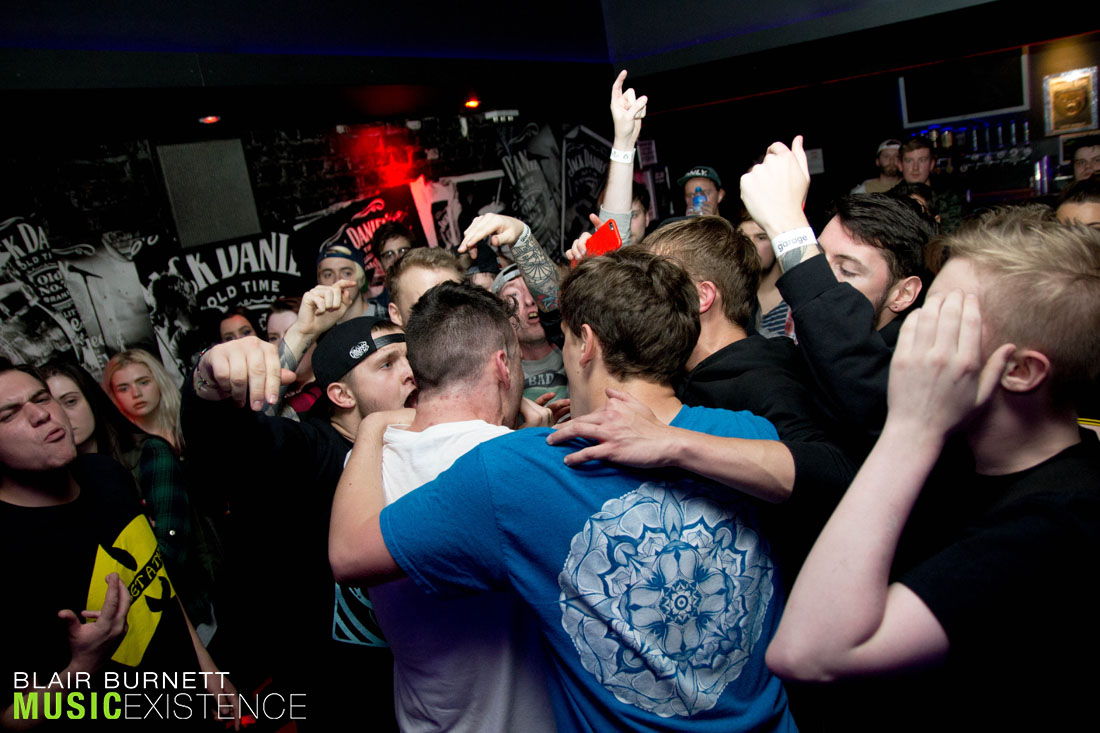 Newly refurbished ‘The Attic’ in Glasgow played home to tonight’s hardcore show. With just 100 capacity and a local support up first, Horizons. Instantly the place was packed with friends of the band who just had a blast down the front, getting right in the face of lead singer Jonathan Holvey and using the space to their full advantage. As my first hardcore show where I’ve not been in the crowd and just on looking it was pretty mental. The most incredible thing was watching two fans hardcore dance in perfect sync in the middle of the floor during a breakdown. It was amazing to finally see some representation of the Scottish hardcore scene. Things were dying down for a while but Horizons have brought it back. For their last song, their new, darker material went out the window and the brought out an old upbeat song which just spurred on the hardcore dancers to just go even crazier. For a band I’ve never seen before, I’d say you make sure to check them out because if tonight was to go buy they have a lot of good things that are about to happen.

There wasn’t much to say about support two, Number Them, other than I absolutely loved every single minute of their set. Lead singer – Danny, had an incredible presence. Another local band that is popping up and refreshing the modern hardcore scene in Glasgow and they seemed to fuel the crowd as well. For the last two song we were told to keep an eye out for a new album which I’m really looking forward too. If The music played tonight is any indication to the material for the new album I’m stoked because musically they are so refreshing and it’s wonderful to have them so close to home.

After a huge stint on Funeral for a Friends Farewell Tour, Zoax were a band that I was absolutely buzzing to see. A chilled vibe of music as the band started their set, with lead singer Adam Carroll just grooving along. Almost as if we are in a jazz club. A silence and a hand clap later we were straight into the set and I love Zoax because of their difference to the previous two bands. A mix of clean and screams was the perfect mix to ease you into the band. Adam wasn’t afraid to get into the crowd and get right up in people’s faces, I have never seen someone so expressive on stage, the movement, the facial expectations, the dances, stances and cheesy grins. “We are zoax, your best friends and your worst fucking nightmare” possibly my favourite thing said over the evening because it was like a cheesy tag line but it worked. That little connection got the crowd laughing and enjoying themselves even more.

Zoax‘s music for me is like something straight out a theatre production with a hardcore spin. You have that soft, melodic show style music then it kicks in heavy and it’s like the best assault on your senses will ever have in your life. But I suppose the music fits perfects with Adam’s dramatic persona. I’ve seen people own stages and crowds before but he was just exceptional and the band make some of the most incredible music I’ve ever heard. “The Wave” one I my favourite songs almost had me reduced to tears, not just for the moving lyrics but for the sheer passion in the performance. Their last song was a perfect end to a perfect set with just the perfect mix of ‘lose your shit’ and ‘shake your hips’.

An interesting intro song, a wonderful county number was the opening but none the less but it was a perfect lead into their first song. I had noticed a running theme in the bands and I don’t know if it’s the hardcore music or just the crowd but none of tonight’s lead singers were afraid to get in the crowd and get right up in people’s faces. Blood Youth‘s new EP ‘Closure‘ was a big part of tonight’s show. Including song written for lead singer Kaya’s mum. It sent the crowd into a sweaty frenzy. With Kaya even giving words to the crowd to be careful of one another “we’re not that kind of band, have fun and keep your arms and legs to yourselves, we’re all about love and we’re all about positivity.”

The best way to describe Blood Youth is a mix of hardcore and pop-punk, you can still see people right up the front of the crowd with the pop punk finger. When they played “Cold Sweat” the first song the band ever released you could tell the fans who had been there from the start. Easily belting out every single lyric and it was intense. After security had to deal with angry and drunk hardcore dancers and they were removed from the venue, it looked as if the rest of the crowd weren’t afraid to come forward and just mosh out. Next month the band will be heading to the studio to record their debut record and we got a sneak preview of one of the new songs “Parasite” tonight and it was a perfect teaser for the album because the song itself was absolutely phenomenal. There is nothing better than seeing a band be so grateful an appreciative of their fans and their crowd and when they tell stories -exactly as Blood Youth did- of when they’ve only played shows to a couple of people that is including their crew. With two songs left the title song from the new EP was a dedication to ever person in the crowd and it was absolutely amazing to see every single person with either a smile on their faces or a hand in the air, showing an appreciation for their favourite band. I had high expectations do the is show and at the very end Kaya gave everyone a little bit of inspiration to get out of what you hate weather it’s a job or a relationship and I think that little message just topped off the show for me and I can easily say this show as a whole was a sold 10/10.