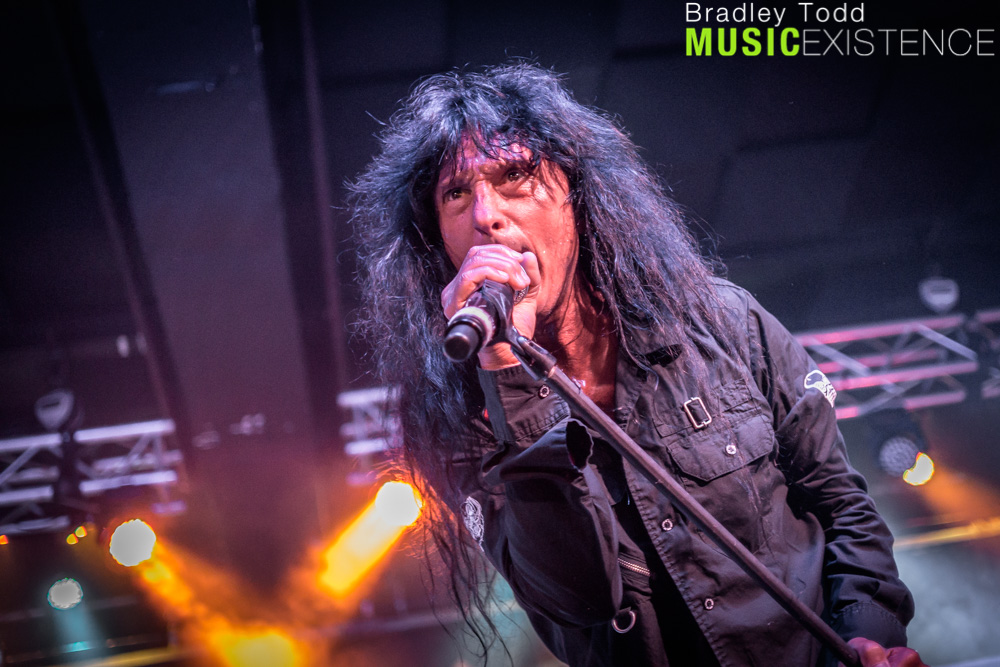 Anthrax rolled into Chicago, a second home, of sorts, for the band (drummer Charlie Benante lives here), in their very conspicuously logo’d Anthrax bus (see front of bus below) as if to announce they’re here to demolish the place. And destroy they did!

Anthrax played the Concord Music Hall in Chicago’s Bucktown neighborhood just mere hours after singer, Joey Belladonna, did the band and their fans proud by belting out the National Anthem at Wrigley Field before that night’s Cubs game. Joey’s rendition of the Anthem was fantastic (view here: https://www.youtube.com/watch?v=80TBVdheXYc ) and set the tone for the ass-kicking the band was ready to unleash later on.

The band made the small stage at Concord their own from the opening note of what was an approximately 90 minute set (see setlist below) that spanned many eras of their long career, and also featured songs from their scorching, filler-free, recent album, For All Kings.

The band’s performance was hard hitting and fast paced, like a tank moving at full speed over the terrain of the Concord stage, and Belladonna’s spot on vocals were like the cannon at the front, firing verse after verse and soaring chorus after chorus. The crowd gladly welcomed the heavy artillery and were fist pumping and singing along the entire show until the music stopped, leaving only the dust to clear.

My only complaint? How does Anthrax not play the Coup de Grace of metal destruction from their new record, Defend Avenge?!  Next time, Anthrax…next time! 🙂

Bradley Todd is a Chicago based concert photographer who also shoots people (only w/ cameras), events, places and things
@@bradleytphoto
Previous SHOW REVIEW: Against The Current, As It Is & Beach Weather at The Garage in Glasgow 22.09.16
Next Gallery & Review: Pop Evil at Count Basie Theater in Red Bank, NJ 09.11.2016