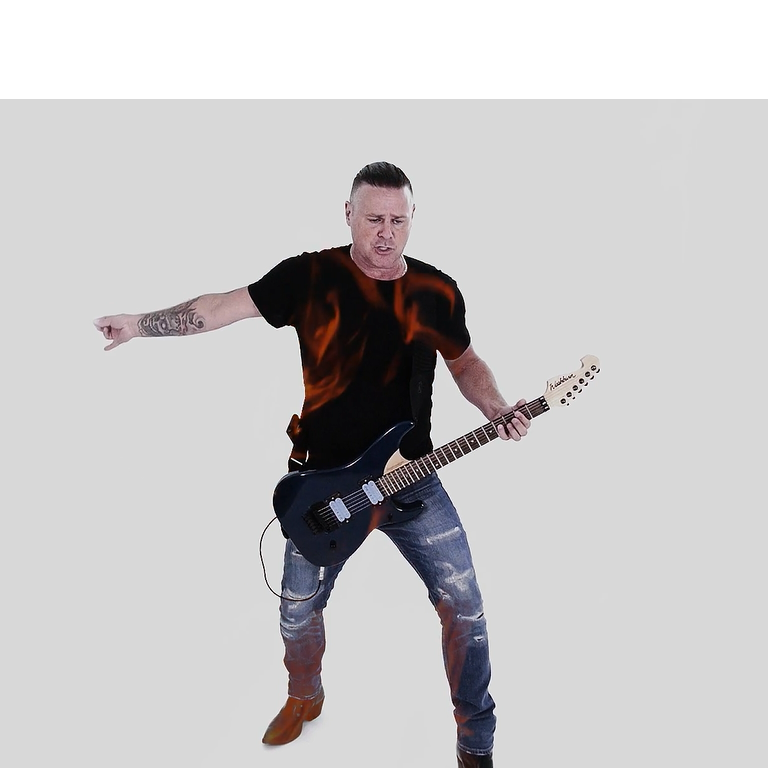 Ian K is a well-seasoned Canadian indie music artist that has played on some of the biggest stages to be found anywhere, and has had the good fortune to play alongside some of the big names in music in Canada, including members of Our Lady Peace, Platinum Blonde, Von Groove, and even Jake E. Lee’s Red Dragon Cartel. He has even sang unreleased tracks with Slash and Velvet Revolver. In February of 2015 his first radio release “Linger” broke the National Radio Airplay Top 50 Rock chart as measured by Digital Radio Tracker. His latest is “Your Hero.”

Ian K has a familiarity about him that falls into the hard rock realm, which is right up my alley. This track “Your Hero” seems to be as good a place as any to be introduced, but it still doesn’t make him easy to describe. I’d like to hear a whole album’s worth because he’s obviously good. The track clocks in at 3:49 and kicks off with a decent guitar riff that wastes no time getting to the first verse. When the vocals take over and he carries on about not being able to be a hero. It’s not that serious, so there isn’t any Will Shakespeare about it. He stays direct and to the point, which is one prime ingredient of a catchy tune. And this is certainly a catchy tune.

I wish it was somewhat longer as well, because it seems to get cut short in the fade. I was definitely wanting more by then and just hit loop to get it. I’m not even sure what it is about this song that works so well, I just know that I liked cranking it up a notch with every play. It isn’t easy describing music when you’re not aware of the artist at all, and it really doesn’t matter who they are. But this wasn’t so hard because he has a comprehensive song here that you just can’t deny has the goods. It’s a fiery little track that pleases by the second, as it blends a good measure of both guitar and vocals that are equally muscular. And the lyrics keep it simple enough to not get too concerned about the meaning of.

The first thing you notice is how everything pops together with a groove and a tight beat to keep it grounded. Then the vocals have no problem cruising over the backing track itself. I can’t get any main influences on Ian K by only hearing this track but it’s everything from alternative to more modern rock based. It repeats with ease and once you’ve heard it, the whole thing can have a sing along effect. But not everything is roses, as there are a few limited aspects to this song. But it’s nothing those who get it will hear. He actually sings about it in the song, as he explains the fact that we aren’t all perfect. But he also expresses trying to do his best, heroic outcome or not. It is relationship based that way.

I think anyone can relate to this, especially if you like to rock. In which it does a ton of in the process of winning you over. The vocals are searing and the guitar is chunky and the rhythm section is beefy. But it also has a radio friendly appeal and should take him further down that road. It harkens back to the sweet spot of the 80s when AOR ruled and you could go hard or soft and get away with it. I’m not up on the music scene in Canada, but if it’s anything like this, then they still remember the good things about music and it’s written all over this. He seems to do a lot of touring, so he is very active but more of this is the first thing that comes to mind about that.

This is a catchy tune alright, but who wouldn’t want to hear more of the same, which it leaves you begging for. But as a single there is nothing to complain about other than that. And I’m not too excited about how the track fades out, as it seems to get cut off. I’d rather it ended on a fast note than a fade. But that’s neither here nor there in the grand scheme of things, it’s just an observation. What is more worth pointing out is Ian’s guitar playing and singing chops. The searing effects of the two combined are what really stands out about this.

In closing it is an excellent track with a lot going for it, and so is Ian K himself. I just hear a good single and always ask for more, more, more.

Previous Attraction To Tragedy Announce Their Debut Album “Passion Over Fashion”
Next Gallery: Ms. Lauryn Hill at LouFest in St. Louis, MO on 9.11.16