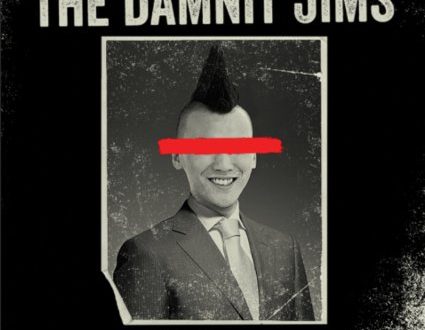 Released from Squidhat Records, the second release from The Damnit Jims entitled Just Punk Enough recalls the glories of prime Social Distortion and Nirvana while still blazing its own individual trail. The band hails from the Nevada/Southern California region but brings a hard-bitten realism that certainly doesn’t suggest sunny beaches but, instead, a low-riding muscle car tearing down a freeway. The four piece plays with all the rambunctious, go-for-broke attitude the genre requires. Just Punk Enough has production with great across the board balance and still packing enough jackhammer wallop to leave a permanent dent in a listener’s head. Despite how easy it is to lapse into cliché, The Damnit Jims resolutely avoid those formulaic pitfalls and, instead, exploit the visceral potential inherent, even in its more comedic hues, to all punk music – its sincerity.

The album blows open with the brief rave up “Pyramids”. The drummer is quite astonishing and sets a furious tempo that vocals, guitar, and bass alike must match. The energy is unrelenting and there’s not a single wasted note in its less than two minute running time. The album’s title track is equal parts serious and sarcastic, but the quality coming through stronger than any else is the lyrical intelligence characterizing their compositions. The band’s method in this area, much like their musical vision, doesn’t waste a single word and credibly embodies the band’s purist slant. Energy remains the defining characteristic of the band’s music on the third track “1%. It’s actually a further refinement of the album’s existing formula, in certain respects, thanks to the band’s willingness to strip their already lean instrumental attack further to the bone during crucial passages. This is a band unafraid to put their heads down and simply play their guts out. The album’s first three songs couldn’t show that better.

The vocals on “Labyrinth of Capitalism” are quite strong and appropriately impassioned and the band varies the high octane riffing patterns just enough to spin the track’s mood in a different direction. The Damnit Jims cast themselves firmly in the mold of their aforementioned influences but there’s a smattering of politically minded material here akin to something The Clash might have pursued. Make no mistake, however – unlike many bands of that ilk, The Damnit Jims come at you fists flying, eyes flaring, full of life. “The City” is the hardboiled zenith of the album, an absolute bulldozer guitar workout with a bleak vision of urban dread that the vocals put over with a steely growl. The lead work streaking over the track helps further raise the temperature.

Just Punk Enough ends with a final fatalistic middle finger to hard times, “Out of Luck”. Much like the opening song, this last cut doesn’t waste a second of the listener’s time with its sub-two minute duration. The name of the game on The Damnit Jim’s second release is power and their songwriting condenses tremendous energy in these fifteen explosives of various sizes and subjects. If this band is carrying on in a longstanding tradition, they pour new wine into old bottles with infectious exuberance.