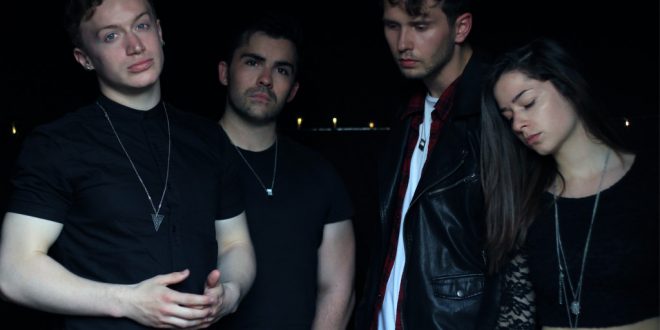 Hailing from the Royal County of Berkshire, the epic-rock quartet Echoic have been on the move as they take Europe by storm in continuous support of their previous EP, Testify. With a tour kick-off in Paris, the band will be hitting Riba Rocks Festival in Spain followed by numerous showcases in Italy and brief conclusion in London prior to their excursion to New York City where they will be taking part in Mondo.NYC. The new festival / business summit has been getting notable visibility as it was newly launched this year by the founders of CMJ.

Coinciding with showcases at NYC’s legendary venues, Echoic will be releasing their newest single “Messed Up Smiles“, an anthem about lost love, and letting go. Fans can expect a music video this fall followed by a second single in November in anticipation for a new EP slated to release in February of 2012.

Biography:
ECHOIC are a young and exciting Alt-Rock quartet from Reading, Berkshire UK. The band were formed in 2013 and blended their love for Indie Alt-Rock music with soulful pop to create a truly unique and powerful sound.

With their intense work ethic, the band has been gaining fans across the world via social media & their over-the-top live show, leading them to secure highly rated support slots with acts including Arcane Roots,The Coronas and Pulled Apart by Horses to name but a few.

In December 2014 Echoic entered the studio to record their debut EP – Testify with Jason Wilson (You Me At Six, Don Broco, We Are The Ocean). The release received support from press and airplay including BBC Radio 1, BBC 6 Music, Radio X, Kerrang and more.

The band has played multiple festivals and continue to play up and down the country, including sold out home town shows. Come September, Echoic will head out to play their first European tour and will take part in numerous showcases at NYC’s prestigious Mondo Music Festival. Echoic will release their brand new single “Messed up Smiles” in the UK on September 12th and here in the states on September 16th coinciding with their showcases. European Tours are planned for the remainder of the year in addition to the release of a music video and second single in anticipation for the release of their EP due out in February 2017. With their unique sound, and soaring vocals, Echoic are the band that everyone is talking about.