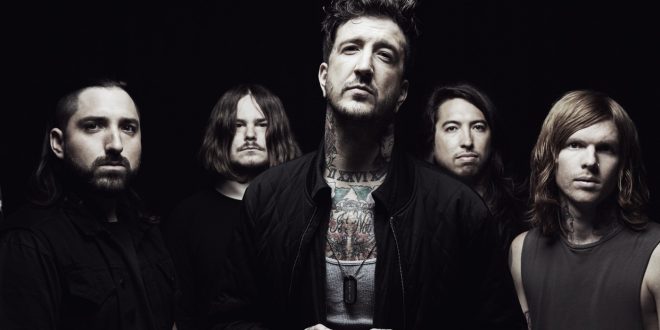 Of Mice and Men’s fourth studio album, Cold World, is a welcome addition to the metalcore scene, and it is one of the most intensely personal and emotive albums I have listened to this decade. Vocalist Austin Carlile found inspiration for this record through his struggle with chronic illness, but Cold World is intended as more than a musical rendition of Carlile’s medical records. OM&M show recognition that any pain, be it emotional or physical, is worthy of the consideration and help needed to recover from it.

“Game of War” kicks off the album in an almost militaristic style,with a solid marching drumbeat. Starting off with a song this strong initially left me apprehensive about the rest of the album, as the melodic vocals and almost relentless bassline set my expectations very high.

The following song, “The Lie,” quickly eased my concerns, as the fast paced riffs provide a release for the suppressed anger in the previous track. “The Lie” deals with the imbalanced American medical system. OM&M included a 14-year-old fan with a serious illness on the track as a gesture of their frustration along with their dedication to their fans. They pointedly express their dissatisfaction with inequality through lyrics like: “Why do some have it all, while others, they have none?” Something that can be applied to many issues in the current political atmosphere, so I’m pretty sure it will be popular with fans.

“Like a Ghost” is possibly the most emotive song in Cold World, dealing with internal struggle and overcoming pain. Heavy, dark verses reflecting personal demons and doubts, and a harmonious chorus compliment Carlile and Pauley’s contrasting vocals, which together flow seamlessly with the song’s structure.

“Contagious” follows on with a guitar riff one can only dance to, but maybe a little too many clashes on the cymbals for my personal taste.

The first instrumental of the album, “-“, is a welcome break from the relentless beats, but this quiet interlude segues rapidly into the first single from the album, “Pain.” Carlile wrote this song about his experiences with Marfan syndrome. However, these lyrics can be interpreted to relate to either physical or emotional pain. For OM&M to put out a song as delicate and personal as this is almost heart-warming, and I love that anyone can find comfort knowing that other people can relate to the content in similar ways.

“The Hunger” continues the energy from “Pain,” and urges its listeners to have empathy with other people to better understand their experiences and differences.

“Relentless” is the most likely to become the anthem of the fans in my opinion. Its message of survival combined with the excellent quality of the song itself makes it one I’d be excited to see performed live.

“Down the Road” is more melodic and offers a message of support along with an impressive drumbeat. A second, quieter instrumental, “+”, offers a quiet comedown from the emotion of “Down the Road,” before the passion of “Away” kicks in.

“Away” is the penultimate song, and seems to heavily feature concepts of darkness and loneliness, yet the chorus offers solace like a cry for help to whoever may be listening.

The final song of the album, “Transfigured,” is the perfect conclusion to Cold World. Throughout the record, the importance of respect and empathy for others is combined with reassurance that seeking help is nothing to be ashamed of. “Transfigured” is about the acceptance of flaws and issues, be it physical or emotional, and even though there are no easy fixes, these problems can be overcome.

Considering that Of Mice and Men set out to create an album which recorded some of the most difficult experiences in the members’ lives, Cold World is overwhelmingly successful in its aims. They approach the challenges they faced due to their illnesses with sensitivity and honesty, through both lyrics and music. The stand-out tracks deal most explicitly with these issues. “The Lie” is brutal and effective in its message of morality, while “Real” and “Away” are two sides of the same coin depicting personal struggle. Of Mice and Men should be proud of this album. They have done something few bands are able to do in combining high standards of music with a meaningful and worthy message to their audience.

Watch the music video for ‘Pain’:

Freelance arts, culture, and music journalist. Lots of words and some radio. Studying for an MA in Media and Journalism. Trying their best.
@lozreviews
Previous Houston Open Air 2016 Reveals Band Set Times
Next Wednesday 13 on Tour with One-Eyed Doll, Gabriel and the Apocalypse and Open Your Eyes