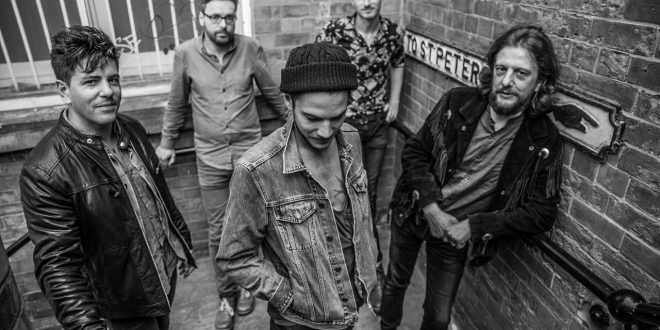 The Slow Show have both a magisterial beauty to their sparse songs and the confidence to let their spellbinding stories find their mark. Rarely since The Blue Nile has a band created such a powerful, fully realised world from what initially appears such a minimal framework.

‘Dream Darling’ is an album that any adult who’s lived a little can identify with; there is a hard-won optimism in its 10 graceful songs. It’s music made by five men who, as singer Rob Goodwin explains, have “gone through the typical life-changing experiences that men in their late thirties and forties experience”.  Whether that’s the romantic regret of the Tindersticks-inflected drama of ‘Breaks Today’ or overcoming loss in the album’s towering centrepiece ‘Ordinary Lives’, this is music to live in.

Having been offered tours in Germany and Switzerland almost immediately after the band formed in 2010, The Slow Show are now a major cult concern and festival regulars in mainland Europe, where they’re signed to Haldern Pop Recordings, the label formed by the team behind the successful festival. At home, their music has been championed by DJs at BBC 6 Music and Radio 2 ever since their debut EP, 2012’s ‘Brother’.

Whereas ‘White Water’ was recorded at Manchester’s Blueprint Studios, for ‘Dream Darling’ the band relocated to a farmhouse in the Lake District. The album was produced by Goodwin and The Slow Show’s keyboardist Fred Kindt. Having experimented with orchestration on ‘White Water’, they were determined to push the classical influences further this time, recording with a choir in Berlin and letting them carry the vocals in places – most notably the soaring wordless finale ‘Brick’, which is the perfect, tear-jerking climax for the album’s theme of change. No matter how gentle the beauty of their songs, The Slow Show are a band worth shouting about from the rooftops.