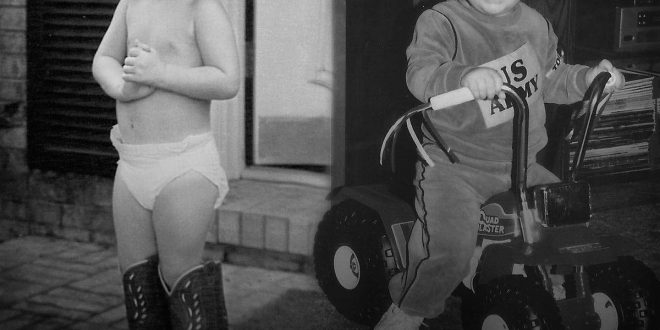 One suspects Florida George Line titled its latest full-length Dig Your Roots to stave off criticism that these poster children for bro-country have strayed too far from real country music. The good news for country fans, and slightly bad news for the act’s critics, is this album is a little more roots-y and a little less bro-y than past efforts. Tyler Hubbard and Brian Kelley, the men that comprise thd duo, sing more about what they love about being from the South, and a little less about scoring liquored-up chicks in pickup trucks along red dirt roads. And that’s good. But just because something is less bad, doesn’t exactly make it a stellar. Just better.

While FGL doesn’t anger country music purists as much with this latest effort, they might disturb religious folk with the album’s first single, “H.O.L.Y.” Kelley has called the tune a “big ol’ love song” with “a worship song feel.” The chorus takes the words ‘holy, holy, holy,’ which are usually only reserved for God Almighty, and uses these ‘spiritual’ words to describe a girl. “You’re my kind if church,” they also sing, which makes it clear they are worshiping the creation, rather than the creator.

Much like Kenny Chesney, Jimmy Buffet, Zac Brown and many others, Florida Georgia Line is more influenced by beach culture party music than true country sounds They bring Ziggy Marley down to their level, for example, for a throwaway reggae tune called “Life Is a Honeymoon.” It’s likely they appreciate reggae artists for the good weed they smoke, rather than the genre’s rich spiritual and political traditions. This is a song where they only want Jah to guide them to the big brass bed in the honeymoon suite.

“Good Girl, Bad Boy” tells the story of a church girl in love with a bad influence. But as much as Florida Georgia Line sings about drunken, lusty nights, it’s surprising these two can even draw a line between good and evil.

One song where it’s impossible to criticize these boys, though, is “Music Is Healing.” It’s a sincere plea for the power of music to provide a little sonic medical help. At one point they sing, “If I could write the perfect song/Make a little right out of all the wrong.” And it’s a universal cry we can all relate to. “God, Your Mama, and Me” features Backstreet Boys. It’s a sweet song about unconditional love. Nobody’s every gonna love this girl more than God, her mama and her man. These are relatively simple words, yet they nevertheless ring true. “While He’s Still Around” proves these guys can write and play an honest to goodness country song. Accompanied by acoustic guitar and upfront dobro, the duo sings a sincere love song to dad. It’s an important message; you need to tell your dad you love and appreciate him (and everyone in your life, for that matter) while they’re still among the living. You also need to do those things you really want to do with them while you can. When heaven calls them home, it’s too late. Lastly, “Grow Old” is a monogamous love song. It’s a nice break from the group’s ‘live fast, die young,’ kinds of songs that take an unrealistic approach to love and romance.

Dig Your Roots is not a great album. However, its good songs make it a relatively pleasant release – at least when compared to past Florida Georgia Line efforts. This act is at least moving in the right direction, and we can all be thankful for that. It gives hope that even bro-country boys grow up some day.