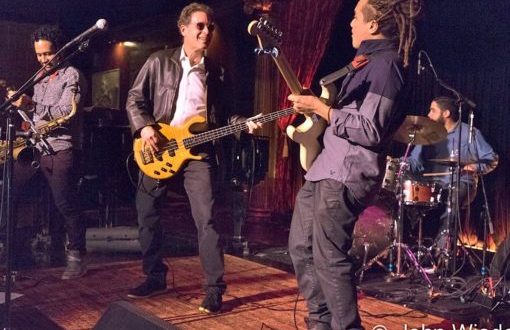 Robert Miller’s long-standing Project Grand Slam unit has recently their fourth full length studio album, The Queen’s Carnival, and it likely represents the peak so far of the band’s recording career. Unlike many bands operating within the same general musical area, Miller’s Project Grand Slam seldom indulges in covers unless they are able to bring something new, even extraordinary, to the work. The last two albums have been marked by a couple examples in this vein. Their recasting of the iconic Jimi Hendrix rocker “Fire” was quite excellent, but they took things a step further with their unlikely and brilliant claiming of former Kiss guitarist’s hit ode to New York City, “New York Groove”, as their own quasi-anthemic track. The Queen’s Carnival features another unusual reimagining. It is far more than just a gimmick album, however. Like all Project Grand Slam releases, it’s one part a love letter to Miller’s musical influences, another part searing personal musical journey, and another part work of ensemble genius. The latest album neatly fills all of those niches.

Listeners will know they are in good, confident hands from the start. “Beyond Forever” is a shot across the bridge of your nose to make sure that you’re awake. The fiery guitar work from six string slinger Yasser Tejeda is worth listening to the song for alone, but Miller and the rest of the band score big as well. It is a fireball opening and the band backs off very little on the second track and album’s first single, “The Rescue”. While this isn’t the all out assault that “Beyond Forever” sometimes embodies, the music certainly invokes all of the desperation implied by its title, but a certain resoluteness as well. The cover of the Ray Davies penned Kinks classic “You Really Got” is nothing less than an astonishing remodeling of the older band’s legendary grinding rocker. Miller’s rearranging approximates that same grinding feel within a much different instrumental context, but a handful of passages directly attempt aping the original, so there’s much that is recognizable here too. The inspired choice of guest vocalist Lucy Woodward to belt out the lyrics is the track’s crowning achievement.

Miller’s continued blending of rock and jazz motifs reaches a new peak on “Gorilla”. This is another song that gives guitarist Tejeda a chance to shine, but he’s cut from the same cloth as the other band members and wisely never attempts to overshadow their contributions. “New Folk Song” is another example of the band’s versatility. This is a far more overtly deliberate offering than heard previously on the album and has a strongly dramatic quality. “Slap Shot” and “Lucky Seven” are studies in contrast. The first song is much more a direct mix of funk and jazz with few discernible rock strains in the mix and it is one of the album’s more stylish efforts. The second song, however, has a much more ponderous beat than much of the earlier material and even a lightly experimental edge. The song’s attempt to truly bring jazz, funk, and rock posturing into accord with each other comes off nicely, but requires multiple listens to appreciate its full effect. This is an inspired album in a way few albums are inspired these days – there’s a feeling of absolute freedom, unfettered from past, present, or future, and the powerful feeling of being present comes through in every song.