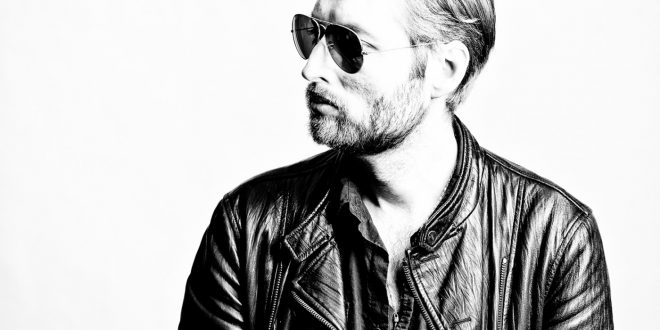 The Killers bassist Mark Stoermer has just released his second solo album Dark Arts, which is sure to win over new and old fans of his work as a musician.

The whole musical journey really starts off with the second track “Drifting Caterpillar” which right away marks the type of sound one will grow to expect from Stoermer on the rest of the album. It has an INXS feel with hazy, psychedelic vocals and many shades of retro with backup vocals singing “ooh la la la,” But even with all the throwback elements it is easy to imagine this being played on modern radio today. It’s one of the best songs on the LP and allows Stoermer to burst onto the scene with a full force that is clearly not to be messed with.

“Take My Time” is a gentle midtempo tune that feels like a throwback breeze drifting into 2016. As with a lot of the songs on the album there is some distortion on the vocals, and while in most cases it doesn’t work for Stoermer, on this particular track it does. It balances the retro yet modern sound with a catchy chorus, channeling The Turtles “You Showed Me” in its instrumentation and vocals that are reminiscent of Mayer Hawthorne’s recent releases. That blending of two very different sounds coming together to forge an altogether original sound is just part of what makes “Take My Time” a standout track on the record.

The sultry and sleek “Avarice/What’s Coming” is one of the best songs Stoermer delivers on the LP. Slowburning and dynamic with strings backing up his voice and dark electric guitars giving it the type of vibe that one might usually find in a James Bond theme song. The vocals are sharp, and in fact it all sounds like something The Arctic Monkeys or The Last Shadow Puppets could have put out. But Stoermer really finds his own voice here, tapping into a vibe that suits his style so well. It’s a commanding performance and one not to be forgotten, psychedelic and undeniably cool at every turn. Stoermer is pulling out all the stops on this track and it shows, allowing listeners to hear the star power in his voice letting us know he more than capable of being a frontman.

Closing out the album is “Pretend Song” which is fresh, Stoermer’s voice without any effects singing plainly. Some songs on the LP may come across as overproduced, but this simple tune is just what listeners need after more complicated in orchestration tracks. It’s charming, while still being layered, and has a childlike quality to it, both in its tinkling instrumentation and lyrics such as “come along my friends/can we still pretend.” One can’t help but be drawn into the tune, in many ways this is the perfect lullaby, something to turn up right before one goes to sleep. It’s quiet and gentle and showcases that Stoermer doesn’t need a bunch of bells and whistles to create a memorable tune. It’s the perfect way to end the record.

Unfortunately the L P takes a few wrong turns which is to be expected on any album. “Spare the Ones That Weep” is one of the few tracks where the echo distortion on Stoermers voice adds nothing to the song and really isn’t needed on an otherwise good track. “The Break In” suffers from a chorus that is better than the verses that are produced to death and “Tow the Line” is just plain underwhelming.

Still Stoermer proves time and time again that his solo efforts deserve to be noticed and taken seriously because he is more than just a bassist for The Killers. He is a star in his own right.