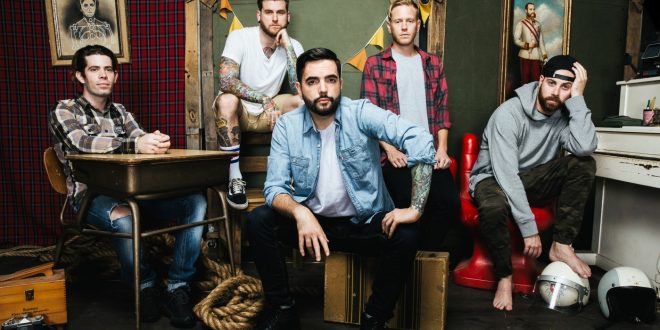 If there’s one thing that listeners can take away after experiencing the new A Day to Remember album, Bad Vibrations, is that ADTR have undoubtedly entered new territory — and conquered it. It comes as no surprise when one factors in the individuals that helped the band’s sixth album come to life. For the first time, ADTR found themselves working with a plethora of professionals. These professionals included producers Bill Stevenson, known for working with Black Flag, Jason Livermore, known for working with Rise Against, and Grammy winner Andy Wallace, known for the Foo Fighters and Slayer.

The first track off the album, titled “Bad Vibrations,” throws the listener right into the mix with an unusual heaviness for A Day to Remember. Hearing Jeremy McKinnon scream ‘Toxic’ over a heavy guitar riff truly sets the mood for the rest of the record.

Following “Bad Vibrations” are two tracks ADTR dropped prior to the CD release, “Paranoia” and “Naivety.” “Paranoia” serves as an ode to the Floridian quintet’s punk influences, while “Naivety” sounds familiar to Sum 41.

Coming in with an even heavier vibe than “Bad Vibrations,” is “Exposed.”

“Exposed” is basically 3 minutes and 38 seconds of head-banging and, without question, moshing once played live. Deep, brutal vocals accompanied by heavy guitar riffs and rhythmic drums results in possibly one of the best tracks of the record.

Ironically, following right after is “Bullfight,” a soft track amongst the heavy-hitters. “Reassemble” and “Justified” come after, each bringing powerful metaphors to life discussing different issues.

“Reassemble” explores the sensation of having to reassemble and question oneself after coming undone, while “Justified” manages to formulate into the words the emotions one feels in a negative, possibly abusive, relationship. With lyrics such as ‘Burn me alive/if you feel that’s justified,’ it’s hard not to relate.

Closer to the finale of the record is a rather unique track, titled “Same About You.”

This particular song manages to stand out in comparison to the rest due to its alternative rock quality, McKinnon vaguely reminiscent of early 2000 alternative rock vocalists. The lyrics also bring a unique point of view to a break up and/or heartbreak, with lyrics focusing on the sadness and acceptance that sometimes someone just can’t feel the same for someone forever. Not to mention, a talented solo is thrown towards the end of this song, serving as a treat for fans.

Lastly, is “Forgive and Forget.”

Serving as a tender, powerful finale, “Forgive and Forget” stands above the rest of the tracks with honest, raw emotions shared unlike any other song in Bad Vibrations. A Day to Remember manages to express incredibly complicated and loaded thoughts in simple, natural lyrics.

The entirety of the record follows the theme of “bad vibrations,” serving as a metaphor for negative people and emotions plaguing an individual who knows they can be better, and wants to be. In the end, “Forgive and Forget” serves as closure, bringing to light how sometimes once a negative relationship ends, once haunting emotions depart someone’s heart, once doors are shut closed, all there’s left to do is forgive and forget, even if it’s an incredibly painful process.