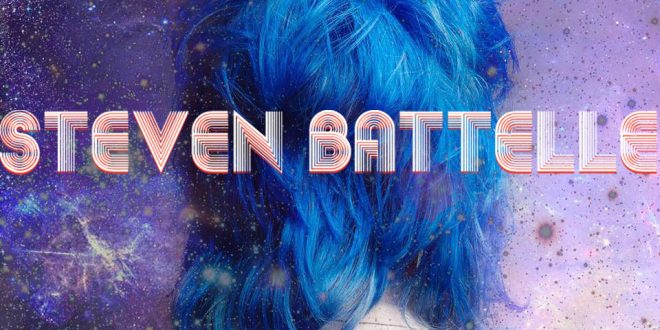 Some of you may know Steven as LostAlone’s former frontman. The three-piece rock band from Derbyshire, England, that released three show-stopping albums and supported the likes of My Chemical Romance, Thirty Seconds To Mars, The Darkness and more. Since disbanding in 2014 Steven has been working non-stop on solo work. Having already released his debut single The Jump on June 20th and self titled single Steven Battelle on July 29th, he will be releasing a new song every 6 weeks for the foreseeable future. Here’s what he had to say about his solo future:

ME: Musically, what have you been up to since LostAlone?
Steven: The day after the decision was made to end the band I traveled to Montreux in Switzerland to begin working on my solo music and I’ve not stopped since. 2015 was spent writing and recording the record as well as writing music for other artists, films etc.. Seems people took notice of my songwriting over the three LostAlone records and I’ve fallen directly into non-stop writing work. The main advantage of this is that I’ve been able to self fund my solo work and avoided getting investment from a record label.

ME: For those who have never heard your solo music, how would you describe it?
Steven: Its an audio party or a carnival of sound. Absolutely no boundaries have been adhered to – what I hear in my head has been translated to the song without any care whatsoever for trend or the satisfaction of anyone other than myself. Too many people try and satisfy a base or whats currently on trend. I believe, hope, that the people into my music expect to be challenged and if I was to just stick to the LostAlone sound then whats the point? I have hundreds of LostAlone songs demoed and wouldnt dream of using them unless it was with [former bandmates] Alan and Mark.

ME: I hear you’re releasing a song every six weeks, some artists take years to even write one album, how do you manage it?
Steven: Well a day doesn’t go by without me writing a song that I wish I could record and release right that second! Six week gaps seems like the shortest gap acceptable right now to actually let the mechanics of releasing music happen.

ME: Speaking of albums.. When can we expect a full album from you?
Steven: As you mentioned … My plan is to release a song every six weeks until I die and keep dropping albums of the songs that are out, plus some bonus tracks only available on the records.

ME: What’s your main inspiration/drive for making music?
Steven: Its unknown to me and its something I’ve from time to time had deep thoughts about. The conclusion is still a mystery to me, I don’t go a day without writing a song or songs and I’ve never tried, its as natural to me as eating and drinking.

ME: How are you feeling about playing your first solo show in November?
Steven: Really excited, its going to be very different to what I’ve done before and its been a long time since I’ve played a show where the set list will be made up by some songs that nobody has ever heard. Hopefully people should know about five songs by the night of the show.

ME: What made you decide to play the show in a church?
Steven: I’ve seen some incredible shows in beautiful settings over the past year on my travels and so that was the inspiration for not playing the usual type of venue. I mentioned this to my agent Beckie and she immediately suggested St Pancras Old Church.

ME: What’s next for you? More travelling, more writing, more live shows?
Steven: My brain is split into two distinct halves right now. Writing for myself and writing for other people/films. So the plan is to keep doing that forever! I’ve already finished enough songs to keep my “release a solo song every six weeks” going well into 2018, haha.

ME: Out of all your upcoming releases, which one are you most looking forward to unleashing on the world?
Steven: Its really tough question actually because I always think, (maybe this is common with all writers), that the last song I’ve written is the greatest thing ever created! So in the spirit of that I cant wait for you to hear the song I wrote yesterday!

ME: Finally, do you have anything at all you’d like to say to your fans, old and new?
Steven: Old, thank you for sticking with me!
New, hello – I hope you get me because its a fine line between love and hate.

Steven will be playing his first solo show on November 24th at London St Pancras Church, tickets can be bought here.
To keep up with each new song release, follow Steven on Spotify here.