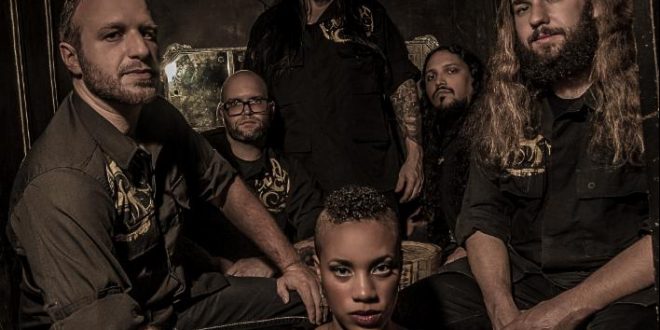 Houston’s OCEANS OF SLUMBER have unveiled a brand new video for “Sunlight” which comes from their full length label debut, Winter released earlier this year.

Filmed in a studio while the band performs the song, “Sunlight” perfectly reflects OCEANS OF SLUMBER’s raw ethereal power radiating from the studio to the stage.

8 out of 10 live review in Metal Hammer UK for their My Dying Bride support show:
“This is the first time OCEANS OF SLUMBER have played in the UK, and despite an initial lack of guitars through the PA, they could hardly do much more to win over a potentially partisan audience. Singer Cammie Gilbert is a star (albeit one who could do with speaking a bit more loudly and clearly between songs) and her bandmates’ prog metal explorations provide her with a vivid and dramatic backdrop. From a surging Winter to a final, spinetingling reading of Nights In White Satin, this is a triumphant first foray on these shores. They will be back and you won’t want to miss them.” – Dom Lawson.”

Tour dates below, and even more OCEANS OF SLUMBER announcements to come!

Previous Interview with Laurent Grangeon of Wakrat
Next Australia (the band, not the country) – New Single ‘Breathe In’, Video & Australian Tour Dates