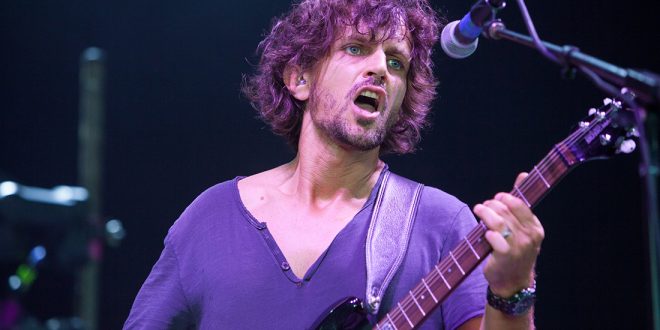 Laurent Grangeon of Wakrat (pictured above) took time out from their North American tour to answer a few questions about the tour, their upcoming album and the music video for their song, “Generation Fucked”.  The band is made up of 3 members- Tim Commerford from Prophets of Rage on bass, Matthias Wakrat on drums and Laurent Grangeon on guitar.

ME: Tell me about the name Wakrat. It’s Matthias’ last name. How did that come to be the band’s name?

Laurent: Well it definitely sounded better than Grangeon or Commerford. Wakrat. Tim really liked that name and I dug it too. It was unusual and different.

ME: At the show you said you were from France. How did you come together as a band?

Laurent: Matt and I are from France but we’ve been living in LA for quite a while. We met through a mutual friend, Matt and myself. We knew we were both musicians and we hadn’t been playing so we said- let’s jam. So we started jamming and what we did next was record the stuff. It was one song, then 3 songs, then 5 songs. When it was about 3 or 5 songs, Matt was already friends with Tim [Commerford] through mountain biking and when Tim listened to it he said- “I’ll play bass on that” and that’s how the band got together. Very organic.

ME: How did you personally get started in music?

Laurent: I kinda of started playing guitar late. I was probably 20 years old when I started but I had a piano background. So I started late. I was a self-taught guitar player, really. I wanted to play guitar and I was really into the sound of the electric guitar so that was something I went to naturally. I started on the acoustic and that didn’t last long so I started on the electric. I just started messing around with sounds and I got into it really.  I was a late starter but I caught up fast. I spent 10-12 hours a day just playing guitar for a couple years.

ME: Wow, that’s impressive. How did you teach yourself?

ME: This was the first time you guys have played large venues like this, what has that been like for you?

Laurent: It’s super exciting, definitely a new kind of feel. We open kind of early so we never know how much crowd is going to show up. But it’s great, just the watts behind you, the sound on stage, with a big stage behind you. Ultimately, it’s what you play music for. It’s pretty awesome.

ME: What are you most looking forward to on the rest of this tour?

Laurent: Well. We don’t have that many shows behind us. If you’re talking Wakrat, we have about 10 shows under its belt. So definitely sharpening our skills, and making our shows bulletproof. It really is just paying our dues.

ME: I know you’ve been to a few places on the tour, Canada included, are there any favorite foods you’ve had on tour so far?

Laurent: Well, I mean, it’s quite a treat for me to be on tour. I was kind of worried because I have a soy allergy. To tell you the truth, in LA, it’s soy everywhere. Soy in the oil, soybean in the bread, in the cooking oil, and everywhere. So it’s kind of bummer for me to go out in LA, it’s kind of depressing. I’m always the odd man out, “Can you do this without this?” So I just don’t go out. I was a little worried but I came to find out that LA is pretty much the only city that I’ve done that is using that crappy oil. I am completely stoked. Even with the catering, it’s a treat.  I eat good food again. Everything is well prepared. Last night I had a quinoa salad.

ME: What can we expect from your upcoming album?

Laurent: It’s fast, unrelenting, unapologetic. It’s all time signatures. It’s pretty furious. This is what you can expect.

ME: The time signatures are unique, can you tell me about it?

Laurent: We love doing that stuff. I don’t think we have one particular song that’s 4/4 all the way. It’s not like it was something we decided to do. It’s just something that came naturally with Matt and I in that room. That’s what’s fun to play. So we might start in 4/4 and then say, “Let’s do this”. Matt always comes up with crazy beats. Even if I come up with a riff that’s like in 4/4, he’s going to come up with a drum beat that’s in ¾ and it still grooves. Because that’s the whole thing, you know when you start doing all time signatures, you don’t want the music not to groove. I think we managed both ends.

ME: You filmed the video for “Generation Fucked” in London as an actual protest. What was that like?

Laurent: It was definitely a new experience for myself. Our label had this bus. It said Wakrat on the side. It was a double decker with Wakrat that said “Generation Fucked” and we were just cruising around London blasting the album on the bus with a bunch of press. And then we just walked to Parliament Square and start a protest there with megaphones and a bunch of people and tried to rally people. Then planted the Wakrat Republic flag in Parliament Square until security showed up and started asking us to leave. I remember Timmy going, “Just say ‘We’re fucked’ on the megaphone and we’ll leave”. They never said it. Reinforcements showed up and then we left. It was quite an experience.

ME: So it seems like a very appropriate song to be coming out right after the US elections. Was it timed that way?

Laurent: Generation Fucked is not a political as people might want to think it is. To me it’s more a social thing. The political aspect, I think, is just a little bit overblown, in general, probably because of years past. Wakrat is more about the music and very personal things and a social approach too.

ME: I think people get a political message from the fact that images of Donald Trump appear throughout the video for “Generation Fucked”.

Laurent: It’s not only Donald Trump, as far as I’m concerned. It’s Hillary. It’s the elections before that. These people care about us as much as we should care about them, if you ask me. They have their agenda and everything is going fine for them.

Click here to see the photographs from their show in Camden, NJ on August 20, 2016.

Their upcoming album is due out on November 11.

Fun Loving Music Photographer and lover of live music in general. I am most likely to be spotted with a coffee in one hand and a camera in the other, somewhere in Philadelphia, New York City and everywhere in between. For more of my music photos: http://myphotos.bellemorephotography.com/
@bellemorephoto
Previous Gallery: Wakrat at BB&T Pavilion in Camden, NJ on 8-20-2016
Next OCEANS OF SLUMBER premiere new video, “Sunlight