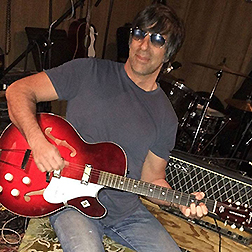 Seth Swirsky is a self-described “manic expressive,” an American pop music songwriter (including the Grammy-nominated “Tell It To My Heart”), an author, a recording artist, a filmmaker, a political writer and a noted baseball memorabilia collector. In 1980, at the age of 20, Seth Swirsky wrote the national jingle for Thomas’ English Muffins. After graduating from Dartmouth College in 1982, Swirsky wrote the Grammy-nominated hit “Tell It To My Heart” with Ernie Gold for Taylor Dayne. Jumping ahead, “Circles And Squares” is his latest in a list of such projects resulting in his third solo album.

All of these things and then some going for one artist is practically as illustrious as it gets, but it is also what most likely keeps Seth Swirsky inspired to stay so fresh. This is an album of 17 pop songs. I am not familiar with him but am familiar with the label which released this title because they happen to be local, oddly enough. But to account for more, his education goes above and beyond the call of music duty. But since this is about his music work, even though the rest is very interesting, it’s important to not be so distracted by that and concentrate on this product. The CD kicks off with “Shine,” and that is what the song does. With piano chords leading the way with some vocal ambience that reminds of duos like Godley and Creme, But it is also very reflective of Americana music as well as psychedelic pop as it blends together nicely. There is also a major Beatles vibe to this very good opener. After the fade comes the title track in the shape of “Circles And Squares” which embodies even more Beatlesque qualities. Old melodies seem to be the subject matter as he pulls off an even more interesting track than the former. The vocals are kept to more of a whisper on this, which adds a nice touch as it takes nothing away from the pop factors. Some more nice piano is applied along with acoustic guitar that makes this track all it can be. “Old Letter” begins with a keyboard warble that is instantly intoxicating, but the track maintains a beauty as it goes, that just holds up very well. It’s not exciting or energetic but it is very hypnotic. On “Far Away,” things go down quite a notch for more of a straight-forward ballad. But the interest picks back up on “Let’s Get Married” which is a tune much more up my alley, even though it does drift a bit, it still contains great pop sensibility that he certainly does not lack in. Let’s also not lose sight of the opinion that this is a very good songwriter, as already proven. He even sings about that on the next track, so it also follows the facts. “Trying To Keep It Simple” is a slice of pop perfection and even mentions how you don’t have to be a Beatle to be a satisfied musician. This is where things pick up quite a bit with a well-crafted and orchestrated song. I think it made the mark for any fan of power pop when you keep it on that mantle. It goes the distance so far in defining that anyway, and he comes out clean in the effort. “I Loved Last Night” is another cool piece but it’s the guitar parts that hypnotize on this one more than anything. More Beatles influences can be felt but are not so easy to nail. “Belong” finds the tempo of the music finally bursting out a little, but the vocal approach tends to damper that until an even bigger burst picks it up and puts it where it logically belongs, no pun intended. It ends on a fine note nevertheless. “Sonic Ferris Wheel” begins with a trumpet which is carried further along in the track, and finds yet another piece of substance to chew on. I find this to be one of the best of the bunch, if a bit too short.

And “Let’s Move To Spain” is a more playful track with some excellent guitar work that adds just enough seriousness to take it all in with a grain of salt concerning the humor, as there is always something to save about these tracks. The simplicity of “The Simplest Way” seems to cover what the release is all about, and the rest is all in order for one surreal collection. In closing it is a lot of tracks to absorb but they’re seamlessly laced together so well that it doesn’t seem to matter and adds plenty to his legacy.