Home / Interview / Interview and Gallery: The Amatory Murder at The Pyramid Club in NYC on 07/24/2016 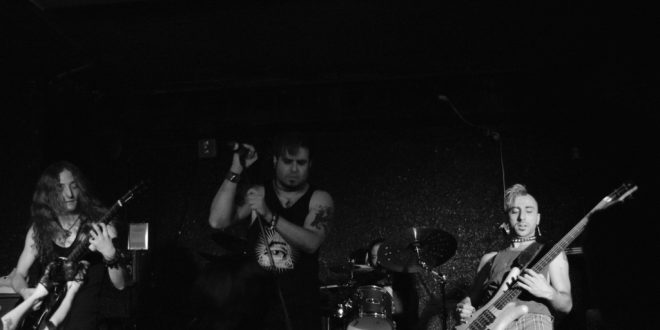 Interview and Gallery: The Amatory Murder at The Pyramid Club in NYC on 07/24/2016

The Amatory Murder sat down with Music Existence for an interview prior to their set at The Pyramid Club on July 24. Originating from Brooklyn, NY, the group was founded by Christian Peppas as an alternative rock act and features drummer Scott Genovese, Jake Witz on guitar, and bassist Alex “Fox” Luddeni. Having experienced a few lineup changes the band has evolved to incorporate several diverse sounds and instruments. Their most recent work, F*ck It! We’ll Do It Live features nine original tracks along with two covers.

ME: Could you describe the origins of The Amatory Murder?

Peppas: As far as history goes, I just started this on my own. I wanted to play live shows. It’s gone through a few lineup changes. But this is the band, this is the sickest guitar player [Witz], the sickest drummer I’ve ever met [Genovese], and the sickest Fox [Luddeni] I’ve ever met. We’re like friends, we’re brothers.

Genovese: It feels natural, it doesn’t feel forced. Because we have that friendship, a strong bond.

ME: While preparing for the interview I read that some of your influences were Muse, NIN, and U2. What is it about those artists that influenced you?

Peppas: Those are my personal influences and I’m also a diehard Beatles fan. My parents were baby boomers, so I grew up listening to John Lennon’s Imagine, Abbey Road and all that stuff. The first band I got into on my own was U2 and I was like, ‘I wanna go see them live!’ My dad took me to go see them and when I saw Bono and how amazing he was as a performer–they were younger at the time– I was like ‘That’s a good job’. I’ve seen U2 like seven times now they’re amazing. Pink Floyd and Muse. Muse sings about real stuff. They kinda have this Pink Floyd stage show that they do. They’re all amazing musicians. That’s what I strive for with this band. The musicianship and the stage show.

Witz: My dad introduced me to rock ‘n’ roll probably when I was like four years old. It was something that always felt right. Even if nothing else in life was working, or something I understood, music always worked for me. After seeing what the gods of the 60’s and 70’s stood for and why they did what they did, I wanted to be a part of it. From there, I discovered metal and that was it. It’s my life. Black Sabbath, Iron Maiden, Motorhead, Judas Priest.

Genovese: I started playing music when I was fifteen. I always had music around me but I really didn’t get it and I really didn’t digest it until I got my drumkit. But I started with Nirvana, Metallica, Korn. Nirvana’s Nevermind was the album that made me go ‘That’s what I wanna do.’ The songwriting, the drumming, Dave Grohl is a package. All in one. From there I went into more mellow. I still love rock. Keeping it short and simple some of my favorites are, Metallica, Nirvana, Pink Floyd, Rush, Dream Theater. I listen to jazz too, it’s important to keep a diverse open mind. Because music is a world in itself. A language. I don’t even call it an art form anymore, I call it a language that speaks to the soul.

ME: What has been your biggest challenge as a musician, and how have you overcome it?

Peppas: I would say as a musician, the business part of it. Because we all love music and performing. I love composing, writing, producing; that’s one of my favorite things in the world. But trying to wrap my head around the business part of it, you have to go into a completely different mindset. I think training yourself to think with less passion. My hat goes off to bands like U2 and Pink Floyd, they have a brand. I think it’s really commendable. That has been my biggest personal issue, separating the two.

ME: How do you guys overcome creative differences when coming up with a new project?

Peppas: I produce all our stuff at the moment; and Fox is the most recent member of this band. And I told him straight up when he joined ‘I don’t want to change what you’re doing already.’ Jake’s a metalhead guitarist so I work with what everyone’s doing. I feel that I could bring out stuff that they don’t know they can do yet, and mold our sound around that. It’s such a democracy. You can’t stifle musicians. These are all incredible guys and who am I to tell them to hold back?

ME: What are your favorite tracks to perform?

Genovese: That would be what we’re closing up with tonight: Pick Yourself Up which is gonna be in our upcoming album. The upcoming record hands-down is the most diverse and I think it’s the best record we’ve ever done. It’s just that natural, diverse, and organic. You can feel it.

Fox: He actually went through and redid his drums to my bass because he wanted to have a more organic feel, which was a big honor.

Peppas: The evolution has been incredible. If you hear our first album which was me and the lineup at that time, it was all programmed beats. Kinda like industrial music and it’s evolved over time. Now we sit and think about how we’re gonna execute things organically.

Genovese: This album that we’re currently trying to finish up, it’s there, practically done. We’re just trying to finalize it and package it and whatnot. But it still has that industrial touch to it, it’s still present but there’s a lot more rock and metal this time.

Peppas: It’s very accessible, I would say to a mainstream audience. It’s still got the synthesizers and electronic stuff but we’re playing as musicians that know their shit. You gotta connect at the shows.

Witz: Old-school rockers and metalheads have started to really like our stuff too.

Fox: There’s a lot more improvisation with this band. I had to improvise a lot more with this album than with my other projects.

ME: Being a band that plays comfortably in this type of music scene, what is it about the genre that attracts you?

Peppas: When you see us tonight, fucking solos (points at Genovese). When he’s doing his drum fills (while pointing at Fox), when he does his funk bass, that’s what’s going on. People aren’t expecting that. You know what I mean? We look like regular guys.

Genovese: King Killer Studios. Thank you SO much, every week for letting us rehearse in your studio. Whether it’s once, whether it’s twice, the time there is so precious. Thank you. If it wasn’t for this studio, we wouldn’t have gotten this band together. Gotten as far as we’ve gotten, or as tight as we have become. Everything. Thank you Dave Bunting, Dan. Thank you guys.

Peppas: We wanna give a shout out to Justin Symbol for bringing us along this weekend. We met this awesome band called Sucker this weekend.

Fox: Special shout out to the street team.

To learn more about The Amatory Murder, check them out at:

Concert lover, music fanatic. If it sounds good to me, the rest doesn't matter.
@njaziaddict
Previous Mosh for Paws Announces Benefit Show for the Montclair Animal Shelter
Next STYX & DON FELDER: RENEGADES IN THE FAST LANE EXCLUSIVELY AT THE VENETIAN LAS VEGAS JANUARY 6 – 14, 2017 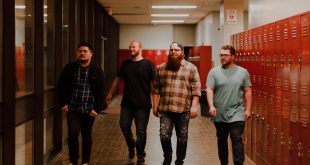