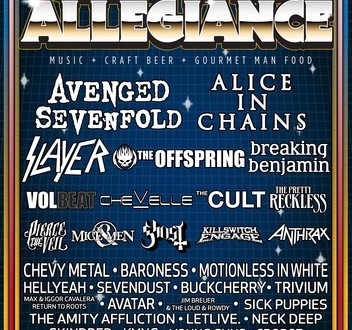 Monster Energy Rock Allegiance will feature a lineup of over 35 bands on three stages, led by rock heavyweights Avenged Sevenfold and Alice In Chains, along with Slayer, The Offspring, Breaking Benjamin, Volbeat and many more. Last year’s single-day debut shattered Talen Energy Stadium’s previous attendance high by nearly 10,000 people, with over 26,000 total in attendance, prompting festival organizers to expand to two days.

The current daily band lineup for Monster Energy Rock Allegiance is as follows (subject to change):

Here’s a preliminary list of Monster Energy Rock Allegiance onsite experiences, including Gourmet Man Food and craft beer, as well as nonprofit organizations with a presence at the festival:

Monster Energy Experience/Sampling: Monster Energy will be keeping all fans fueled up and ready to rock by offering free sampling on their Monster Energy viewing deck. Enjoy Monster Energy drinks from one of the best seats in the house. Make sure to check back throughout the festival for a schedule of Monster Energy’s interactive artist experiences.

Zippo: Zippo Encore will offer a full stock of Zippo lighters, including the limited edition festival designs. Come by and check out their contests and giveaways or get a free lighter fill or tune-up. Be sure to bring your Zippo lighter to the festival, it could be your ticket to special experiences.

f.y.e. Fan Experience: f.y.e. will be hosting the ultimate fan and artist interactive experiences throughout the festival. f.y.e. is the only place at the festival to get all your favorite band’s music – and maybe even get to meet your favorite Monster Energy Rock Allegiance performers. Check back for updates on artist meet and greet and autograph signing sessions as well as unique experiences and offers thanks to Razor & Tie Records and Roadrunner Records.

Dyin 2 Live / Fxck Cancer: The F C Cancer Foundation’s mission is to fight cancer by raising awareness and to educate about early cancer detection, ultimately putting an end to late stage cancer diagnosis. The Dyin 2 Live wish granting program looks to enrich the lives of those fighting cancer by offering them an experience that will bring joy, hope, inspiration, and courage into their lives. In doing this, the program hopes it can help give the cancer fighter a chance to forget, even if it’s only for a day, what they are battling. The hope is that it can be used as a source of inspiration to those needing a brighter day in their darkest hour.

Sharethebus: Sharethebus is the fun and easy way to get to Monster Energy Rock Allegiance. Shuttles and buses from Harrisburg, Newark, Philadelphia, and more start at $12.50 for a round trip pass. Purchase your bus passes here. Sharethebus was founded by two individuals from Montreal named Wolf and Kyle. They were fed up with how hard it is to rent a charter bus, and wanted a better way to travel together. In 2014 they started Sharethebus and quickly realized that what they’re offering is something that a lot of people want. Today, Sharethebus is a growing team of travel experts, developers, and rock stars who are building the best way for you and all your friends to go where you want, when you want, all while having a blast.

Hotel discounts for Monster Energy Rock Allegiance are available through Curadora. For full details about all tickets, hotel and VIP packages, go here.

Talen Energy Stadium is a state-of-the-art Major League Soccer stadium that serves as the home to Philadelphia Union and is located at 1 Stadium Drive in Chester, PA, just outside Philadelphia. 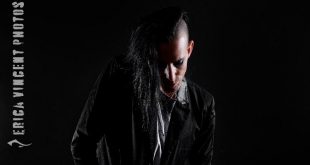