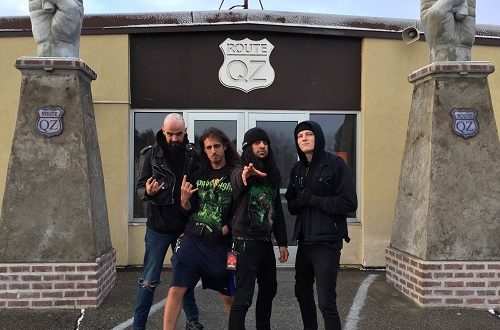 HATCHET Is Hitting The Road w/ ACT OF DEFIANCE

Bay Area thrashers Hatchet, just home from completing a tour supporting Eliminate, will take their metal attack back on the road starting September 14. This next U.S. run will see the band supporting Act of Defiance, the new band featuring guitarist Chris Broderick and Shawn Drover, both formerly of Megadeth, in addition to bassist Matt Bachand (Shadows Fall) and vocalist Henry Derek (Thrown into Exile, ex-Scar the Martyr).

“Hatchet is beyond thrilled to support the guys in Act of Defiance this fall on their headline run of dates. Not only is the past connection to Megadeth cool with Chris and Shawn, but the band has also quickly gained a sound that is their own and all the musicians bring their own flare,” comments singer/guitarist Julz Ramos. “It’s also great to see a band that isn’t afraid to work from the ground up and play some small to mid-size clubs despite them all having great history and past success. We look forward to smashing and thrashing with these guys at every club. We are excited!”

After self-releasing two demos, HATCHET’s debut album, Awaiting Evil, was released in mid-2008 via Metal Blade Records. The album was well-received by thrash enthusiasts and proved a great beginning for the band. After some line-up changes including guitarist Julz Ramos taking over on vocals, Hatchet released their sophomore effort, Dawn of the End, through The End Records in 2013, and spent over a year on the road with Soilwork, Jeff Loomis, Threat Signal, Black Tide, Affiance, Cellador, Exmortus and Flotsam & Jetsam. With a loyal fanbase, their third album, Fear Beyond Lunacy, was released last October and the band continues to promote themselves with consistent roadwork alongside groups like Metal Church, Doyle, Kobra and the Lotus, Eliminate, Black Fast, Lich King and Green Death.