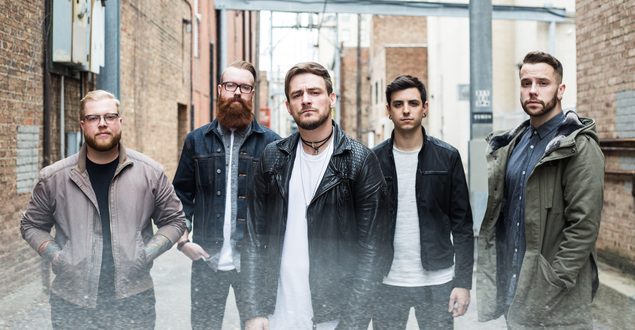 Following a full summer on the Vans Warped Tour 2016, Rockford, IL’s THE COLOR MORALE has announced a North American tour as support to Our Last Night and Hands Like Houses, with additional support from Out Came The Wolves. The 30-date tour kicks off on Nov. 4 in San Diego, CA. The band will be touring in support of their highly-anticipated fifth studio album Desolate Divine, set to release this Friday, Aug. 19. Scroll down for full tour routing.

Desolate Divine has already received notable praise, with Alternative Press calling it “The Color Morale’s most perfected offering yet,” and Outburn Magazine noting the album “takes them into fresh and thrilling territory” and “showcases their boldest and best songwriting to date.” Desolate Divine is available for pre-order both digitally and physically at TheColorMorale.net. Each pre-order includes instant downloads of new singles “Walls,” “Clip Paper Wings,” and “Lonesome Soul.”

THE COLOR MORALE – Following the success of early albums, We All Have Demons [2009], My Devil in Your Eyes [2011], and Know Hope [2013], the band received a 2014 Alternative Press Music Awards nomination in the category of “Best Breakthrough Band.” Shortly after, Hold On Pain Ends debuted at #28 on the Billboard Top 200 upon release-the group’s highest chart position yet. The recording process for Desolate Divine marks a first for the musicians as they enlisted multiple producers and songwriters to perfect the dynamic sound they wanted to achieve-Dan Korneff [Pierce The Veil, The Devil Wears Prada], Erik Ron [Panic! At The Disco, Saosin], Scott Stevens [Shinedown, Halestorm, Nothing More] and Matt Wentworth. For the Rockford, IL quintet, treading new territory has uncovered their most poetic, potent, and powerful body of work to date in their fifth studio album, Desolate Divine. The new album captures the band’s palpable aggression through expansive production, yielding to a bigger sonic backdrop, while preserving the sense of emotional vulnerability they’re known for. Whether you’re a first-time listener or a long-time diehard, you’ve likely never heard The Color Morale like this before, as the band remains unflinchingly real and unashamedly ambitious in Desolate Divine.