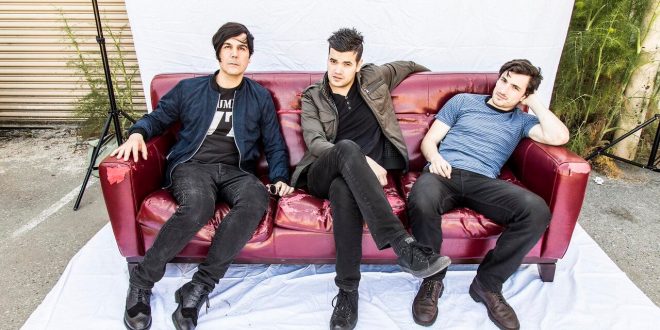 The six-song EP was produced by uber-producer Jeff Saltzman, who is best known for his work with The Killers, Fischerspooner, Blondie and more. NEW DIPLOMAT’s individual musical influences, (The Killers, Muse, New Order, The Strokes) each lend a bit of unique flavor to the trio’s sound. NEW DIPLOMAT is: guitarist Paolo Von Giordano, vocalist/bassist Horacio O’Brien-Ferres and drummer/percussionist/synth player Jacob Hartog.

The band is also set to debut its brand new video for the EP’s first single, “Stay Up,” very soon. The video stars Dores André, soloist and principal dancer for the famous San Francisco Ballet, as a young woman plagued by her ability to see the “scorecard subtext” of her everyday encounters. The video was directed by Elliott Bastien Morin of 3Motion Creative.

The six songs on the EP will appeal to a wide audience: yes, NEW DIPLOMAT’s music rocks …but you can also dance to it. Saltzman’s “Killers-esque” influence can be heard throughout the EP, as well as the band’s various musical influences, such as New Order, Muse and The Strokes. It’s quintessential 21st century new wave at its finest.

And the press agrees…according to Prelude Press, “New Diplomat are breaking stereotypes while showcasing wonderful diversity and a strong, unique sound on their new EP,Replaced. The groovy, smooth sounds on Replaced make these six songs very easy to listen to, but without blending into one another or sounding boring by any means.”

“Working with Jeff Saltzman on this EP was amazing,” Von Giordano says. “He has this way of identifying a specific musical element that’s special, then seamlessly bringing it back throughout the song. For ‘Stay Up,’ we were messing around with synths at our studio. We were talking about finding a sound that had a certain unique quality, almost confrontational. As soon as we felt the song was ready, we made a demo and sent it to Jeff. He replied immediately with ‘Oh yeah, let’s do this!’”

The band is also plotting out live show dates in select regional markets, starting with the trio’s native San Francisco. Stay tuned for news of those dates, as well as follow up singles and videos!

Previous Gallery & Review: VOLBEAT at Ford Amphitheater at Coney Island Boardwalk in Brooklyn, NY 08.08.16
Next Set It Off Announce Something New Tour