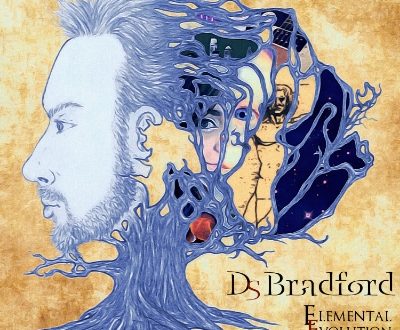 D.S. Bradford has released Elemental Evolution EP which melds together light and dark sounds, engaging listeners and putting forth a record that will get people talking.

“The Rise” is under a minute long but showcases what Bradford can do in so little time. It is haunting with a piano driven melody that ebbs and flows in all the right places and gives listeners just a taste of the genius of Bradford. It’s one of the most memorable songs on the entire EP, and evokes such an emotional response upon hearing it that one can’t help but brace themselves for what is to come on the rest of the record.

Switching gears, “Elemental Evolution” is more mainstream rock with pleasing vocals that come across as chill and effortless. It definitely is more on the pop side of the rock spectrum, but this middle ground suits Bradford just fine. Just because it is the most radio friendly track on the album does not mean that it loses an edge that Bradford knows how to deliver. With screechy guitars and a commanding drum backbeat, it is here where Bradford seems the most comfortable and one can see why the album would be named after the tune as it one of Bradford’s best.

The EP ends with “A Call to the Stars II: A Home in the Sky which is a seven minute (plus) song that really brings the whole record together. It simply drifts along with amazing harmonies and a trippy 60s or 70s vocals that let Bradford come through as a superior singer and songwriter. The structure of this particular track is a wonder to deconstruct, easily sliding in and out of soft and hard rock. At times it explodes like a star shooting across the sky, Bradford breaking out of his comfort zone to show the music world that composing a lengthy majestic piece of art is something he has been building toward the entire EP and it works on every level.

There are a few songs that don’t go over as well on the album. At first “Oceans” harsher sound seems to come out of nowhere when you compare it to Bradford’s previous tracks, but once one gets past the jarring initial reaction and listen to the rest of the EP one will see how it all fits. Meanwhile “The Seasons” doesn’t quite mesh together the opposite end of the spectrum sounds as well as on other tunes on the album, the guitars a little to shrill and the composition at times feels a bit all over the place.

Still, if you’re looking for something different, something to have a conversation about with other music enthusiasts be sure to check out Elemental Evolution.