Home / Photography / Show Review and Gallery: My Life With The Thrill Kill Kult at the Highline Ballroom in NYC on June 13, 2016 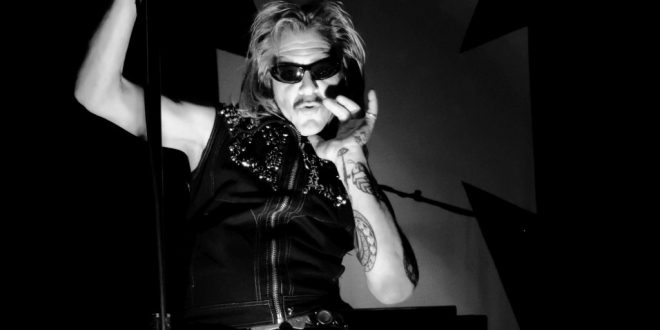 Show Review and Gallery: My Life With The Thrill Kill Kult at the Highline Ballroom in NYC on June 13, 2016

The summer heat was brought in full force to New York City with the intense performance by My Life with the Thrill Kill Kult at the Highline Ballroom. The band was high energy through the entire set which featured fan favorites such as ‘Sex on Wheels’, ‘A Girl Doesn’t Get Killed by a Make-Believe Lover… ‘Cuz It’s Hot’, ‘Ride the Mindway’, and ‘A Daisy Chain 4 Satan’. Fans gathered closely around the stage to witness members Buzz McCoy, Groovie Mann, Mimi Star, and Justin Thyme rock out to some of their favorite tracks. There wasn’t a dull moment in sight from beginning to end.

Mann entertained the crowd on multiple occasions as he danced his way playfully across the stage towards bassist Star and guitarist Thyme. McCoy steadily maintained the beats keeping everyone around me on their feet, dancing and singing along. The energy was contagious and pulsed throughout the venue from both fans and musicians.

Right before the encore, the band played ‘After the Flesh’, which was featured in the soundtrack of the cult classic film, The Crow. This put the audience in a frenzied party mode. The songs featured in the encore were ‘Final Blindness’, ‘TV Sista’, ‘Neon Diva’, and ‘Electrical Soul Wish’. The night ended and all those present were left feeling ‘Kooler Than Jesus’.