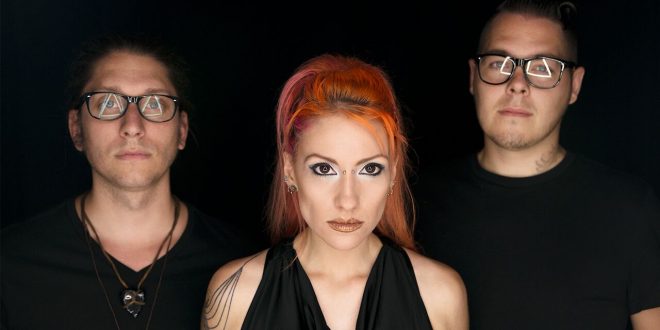 Electronic pop trio Hydrogen Skyline have returned with their third full-length LP Photovoltaic which continues to include their heavy emphasis on pleasant vocals and unique mixes of instrumentation. The first thing that really stands out about this band is there versatile transition from one genre to another. At times the band will feature a peppy, energy-driven style, while at other moments they will choose to focus on a slower, more synth-heavy progression. With such a hefty arsenal of sounds to pick from, Hydrogen Skyline are able to put together a fresh piece of pop that that has enough diversity to retain listeners’ attention through its entirety.

The album opener “Seize the Day” does a perfect job of showcasing the talents of each band member in equal sections. The vocals from Asher Skyline are paired nicely with good piano work and a steady rhythm section provided by her husband Norman and his twin brother Mark. The song lives up to it’s name and is quite uplifting in both its lyrics and instrumentals, making it a joyously cheerful song to begin with. The following track, “Analog in Digital” has a heavy dose of 80’s injected into its core. For something that sounds like it could have topped the charts roughly 30 years ago, the track still comes across as a well put together song that doesn’t just rely on its nostalgia kick thanks to the standout performances from each group member.

Other tracks like “Battery Acid” and “My Demons” offer more emotional takes on the band’s style. With a presentation that often times only features the smaller exposure of various instruments with the key point of focus being Skyline’s vocal performance. It’s hard to deny that Skyline has a very pretty voice that fits in just as well with the faster paced dance-pop melodies and the softer, more fragile ballads that are mixed in. What might be the most impressive though is how well the band is able to easily transition from one style to another. At one moment they will put together layered pieces of upbeat pop music and then seamlessly flow into a quieter, more toned down element from track to track without skipping a beat or feeling too jumbled in their consistency.

Although the band proves to be good at many different styles, the main issue at hand is one that has faced other artists before. Similar to groups like No Doubt or Paramore, at times there seems to be a heavy amount of attention towards Skyline in certain areas. On tracks like “Dropping Names” and “High” there were times where it would have been better to see more standout moments from the other band members. Every member here is greatly talented and clearly fantastic at what they do, seeing as how each of their performances on other tracks were quite impressive, so it was disappointing when there would be certain tracks that didn’t call for more moments for each member to shine. With that in mind, this change in effort makes the album feel a bit more varied with what it has to offer and that overall makes for a unpredictable listening experience.
Hydrogen Skyline might not be offering an abundant amount of new ideas when it comes to electronic pop music but they have definitely crafted a solid contribution to the genre. With impressive and diverse performances from the band throughout the project, Photovoltaic is a well made piece of pop music that is sure to please those who are familiar with the group as well as offer a good introductory to listeners who are not already familiar with the genre as a whole.

Cain Miller is an aspiring writer who hopes to work his way up and gain notoriety for his material. Having written about film, television, music, and sports, Cain is always looking to gain as much experience as he can and continue to improve his writing abilities.
@cainemiller
Previous Gallery: Baroness at Webster Hall in NYC 08.14.16
Next Sleeping With Sirens Announce Tour with State Champs, Tonight Alive & Waterparks