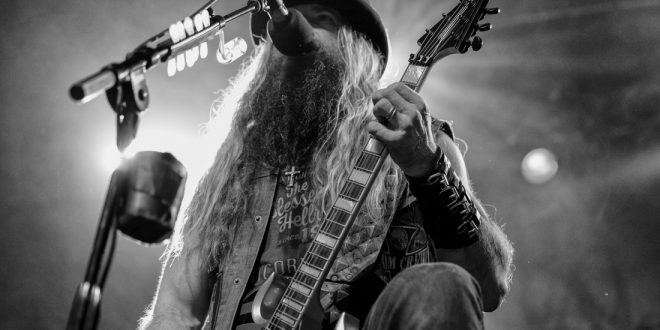 Zakk Wylde brought his solo tour to Philadelphia and made a stop at the historic theater of the living arts, also known as TLA. Make no joke, this venue is as historic as you imagine. Built in 1908, the TLA was originally a movie theater. Old school chandeliers hang from the ceiling above and with a maximum capacity of just 800, this venue was the perfect spot to see Zakk Wylde.

Zakk is touring in support of his most recent solo album, Book of Shadows II. With Book of Shadows II being Zakk’s second solo album over a twenty year span, you can imagine how excited the BLS family is across the nation to see the material live. And that’s just what ensued in Philadelphia at the TLA.

Zakk and his brothers in Black Label Society took to the stage shortly after 10 o’clock. What would occur over the next two hours was nothing short of a guitar frenzy, face melting, badassery, adrenaline filled, jam fest.

The crowd in Philadelphia will not be the same after what they experienced last night. The love, blood, sweat and tears poured into the performance was absolutely amazing. Together Zakk and co nailed new songs from his solo record including Autumn Changes, Tears of December, Eyes of Burden, Yesterday’s Tears, The King, and Sleeping Dogs.

You’re in for a real treat if you can catch Zakk Wylde out on this tour. If you were a fan of Black Label Society’s Unblackened album, then this is just the tour for you. Check Zakk out in a city near you – you won’t be disappointed.

Resident Music and Photography addict from Northern, New Jersey.. USA. Got into both music and photography at a young age.. it's been history since!
@billtnj
Previous Gallery: Killswitch Engage at Ford Amphitheater at Coney Island Boardwalk in Brooklyn, NY 08.08.16
Next Ra Ra Riot Confirm Headling Dates This Fall With Young The Giant