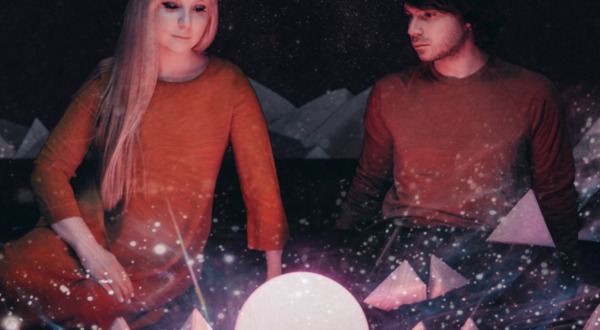 Corbu have just released their debut album Crayon Soul on August 5th, and it is full of trippy vibes and 80s nostalgia. While it is not the most cohesive LP, what it lacks it certainly makes up for with enthusiasm and some standout tracks.

“Neon Hallway” has more than a touch of resemblance to Tears for Fears “Head Over Heels,” but with a more upbeat tempo and pace. It’s one of Corbu’s more mainstream sounding songs, but still sounds authentically retro enough that it one might think it was released in the 1980s. That genuine feel is not something every band can accomplish but Corbu do it with an effortless ease. There is their signature electronic stamp on the tune, which is never very far from any of the duo’s songs, and the psychedelic mood is also still felt here, just in a slightly different context. The vocals are airy and gentle which sit in contrast with a darker toned instrumentation. It’s one of the best tracks on the entire album, and begs to be put on repeat.

Corbu delves into the 60s, with “Better Better Off.” The layering of instrumentation along with the hazy echo effect of the vocals work in perfect unison to create one of the better tracks on the LP. Honestly the lyrics are a little hard to decipher, but it doesn’t matter because the vibe is so strong that one can just feel what Corbu is showcasing. There’s a trance like quality here that never stops wich may put one in a dizzying spin they may never want to come out of. It’s the type of song to get fully lost and immersed in especially because it is over five minutes long. Admittedly it does drag a bit at that length but it also serves the song really well as a wall of sound that is seemingly never ending.

“Battles” is the most straightforward track on the album and also the most relevant and modern song on the LP. Here the lyrics are crystal clear “swim across the ocean/I can see the light and it keeps me up all nigh,t” the song begins and this time it is easy to fully understand the meaning of the track. It’s extremely radio friendly while still retaining a slight 80s sound, and it is without a doubt the catchiest track on the LP. Sounding different enough from other tunes on the album, but still bringing in the electronic texture, helps the duo find a bit of a new direction, but unlike other moments on the LP “Battles” works completely and is a great introduction to any new fans.

Near the end of Crayon Soul Corbu get into more experimentation with “We are Sound” which opens with effects of waves crashing and birds calling. It has a driving, infectious melody and a great dance beat with a lighter tone. Yes that 80s-modern tone is still prevalent here, but it comes across as more gentle and part of that is due to the soft vocal delivery that is showcased on the track. Halfway through the beat changes slightly although it still has that chill wave vibe, and it almost sounds like there are two different songs being connected. It doesn’t entirely come off as successful, the last minute or so could be cut to make the song more efficient, but overall it is still one of the highlights of the LP.

Corbu definitely have a main sound, but often when they branch into new territory it doesn’t work to their advantage. “Branches” sounds overproduced and loses itself in muffled vocals and a more talk like approach. Another problem with the album is the abrupt shift that some of the songs go through midway. “Marching Orders” starts off strong with minimal instrumentation and a Smiths like vocal delivery but all that changes very quickly and may leave listeners on the fence on the song as a whole, as this reviewer was wishing the first part of the track had stayed around. The same problem arises in “Watchmaker” which again sounds like two different songs messily strung together.

Still, there are plenty of reasons why one should check out this debut as there are some diamonds in the rough that are just waiting to be discovered.