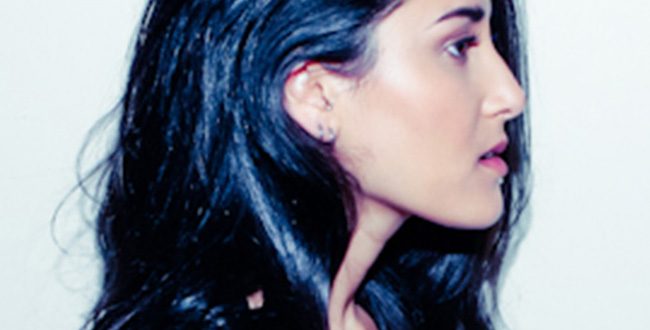 Imagine Lana Del Rey, Gwen Stefani and Madonna (circa the 80s) got together to put out an album. The result would sound a lot like Salt Ashes, aka Veiga Sanchez, debut album dripping with electronic grooves and swoon worthy vocals.

“Sober” starts off with Sanchez delivering one of the best lyrics on the album “I’m watching humans dream their dreams” in a Del Rey style of vocals before breaking into more of a pop Stefani/Madonna sound. The electronic element is prevalent, as it is on all of Sanchez’s songs, but here a bit of a calypso vibe is thrown in the mix and helps separate this song from the other tracks on the album. It’s the absolute best song on the entire album, with a chorus so catchy it’s hard to believe Sanchez isn’t already a household name. Blending together pop queens with a sound of her own, fresh and relevant, Sanchez proves over and over again, but especially on “Sober,” that she is one artist to watch out for in 2016.

Immediately following up “Sober” is the slower, and at times Tori Amos-like, “Whatever You Want Me To Be,” and as one will quickly learn, this album doesn’t have one bad song. It’s sleek and slow burning with little instrumentation at first before crashing into a fuller sound. “Just need you to need me” Sanchez sings over and over and one can’t help but fall under her spell. While this is not exactly a dance jam that Sanchez is so good at delivering it is delightful to hear this other softer, sultry side to her and her vocal performance is top notch, only reaching for the falsetto when she needs to , in complete control of her instrument. The more laid back, sparse, approach really works well here and though the song is a bit of a ballad in never drags or feels too long and that is directly because of how Sanchez captivates listeners right from the very first note.

“Chemical Rush” is a bit darker than the majority of the songs off of the LP, but it still retains Sanchez’s signature electronic-pop sound. The chorus is especially strong here as Sanchez sings “I’m trying to find my chemical rush,” and like so many of the other songs off her debut, the hook will get stuck in ones head after a first listen. Sanchez once again is a master of her own vocals, knowing when to get light and airy and when to be more bold, solid, and in command. It’s the type of song that would fit right at home on top 40 radio but still has enough of an edge that it would get plenty of alternative airplay. It’s hard to pick out standout moments from the record as each song is superb, but there is a special quality to this song that helps it become one of the most memorable few minutes off of the LP.

The record ends with “No Sleep,” and right from the start it grips listeners. “Take your hand from my thigh you know this isn’t right/we can’t go there/the smoke from your mouth is rolling down my spine,” Sanchez sings in a dark but ethereal tone that makes this song the most Lana Del Rey-esque. It’s slow and sultry and Sanchez knows just how to play the content to her audience, with slow pacing and minimal instrumentation. Sadly it does lose a little steam when the song perks up to a more midtempo beat but Sanchez’s incredible falsetto makes it work, as listeners will get lost in her voice. At times it does feel like there are two different songs being weaved together, but if anyone can pull off the change it is Sanchez.

There are 14 tracks off of Salt Ashes, and every single one is not only a gem but consistent. In fact it’s one if not the most consistent and relevant album this reviewer has heard in 2016. Take notice now because Sanchez and this album are about to make some serious waves.