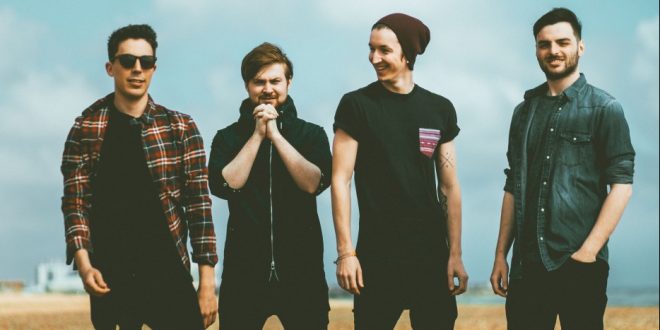 Bristol’s four-piece genre-fluid, alt-rock band Area 11 have been making waves with the recent release of their Modern Synthesis via Cooking Vinyl on July 1, 2016.

A blast of multiple musical styles of rock, hardcore, pop, and punk and melding into a blast of exuberance, their brand of frenetic rock has taken over the UK Billboard charts, landing #27 in the Album Charts, #2 in UK Rock & Metal, #9 in UK Independent Artist Chart, and #10 in the UK Vinyl Chart. The media has been equally as excited with Rocksound chiming, “When Area 11 cut loose, they deliver some irresistible earworms,” and Alex Baker of Kerrang! Radio’s Fresh Blood proclaiming, “It’s a mad old mix, but my god does it work!”

“We started work on this album way back in February 2015, in a little village in Italy, and it’s been a long, thrilling, difficult and rewarding process,” says lead singer and synth player Sparkles*. “We’re really excited to finally be putting new music out.”

With intricate guitar work matched with a rhythm section that can alternate between a hurricane and a breeze effortlessly, Area 11 combines masterful genre shifts like their mates Enter Shikari while keeping the melodic tones deeply embedded in the framework.  From the majestic opening of  “Override” that erupts into a frenetic masher to epic “Watchmaker” to the anthemic “After the Flags”, Modern Synthesis pulls together different genres and rhythms and blends them into a seamless whole.