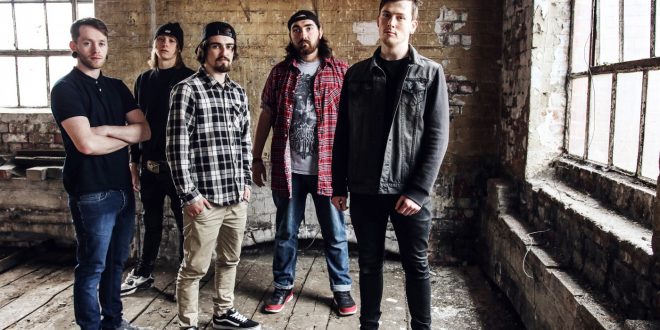 Introducing Essex born post hardcore quintet FAR FROM HISTORY, who are pleased to release a preview of their forthcoming EP ‘Gallows Hill’ with a free download of new track ‘A Negative’.

Kerrang Radio’s Alex Baker added the bands new single ‘Shockwave Asylum’ to his Fresh Blood Show playlist as soon as he heard it and not only that, Scuzz TV have now added the video for the single to their Scuzz Underground playlist. The band were recently added to this year’s Bloodstock Open Air festival after winning the Metal To Masses competition and are now fully charged to get their music out there to a wider audience. In the past they have shared stages with the likes of Hacktivist and Cabin Boy Jumps Ship, as well as headlining shows in their hometown.

Download FAR FROM HISTORY’s track ‘A Negative’ via their bandcamp HERE or listen to it here below..

“If you like heavy metal, chances are you will like our music; we pride ourselves on not confining too one sub genre within metal, but spanning the whole genre. Which means there’s something for everyone.” – explains guitarist and backing vocalist Aidan Cooper.

In comparison to their earlier material, ‘Gallows Hill’ is a lot heavier and contains one hell of a thump; expect huge breakdowns, earth shattering riffs and harder hitting vocals. The band wanted to keep one original element to the forthcoming release and kept true to the FAR FROM HISTORY name by throwing in some catchy choruses with a fresh new edge.