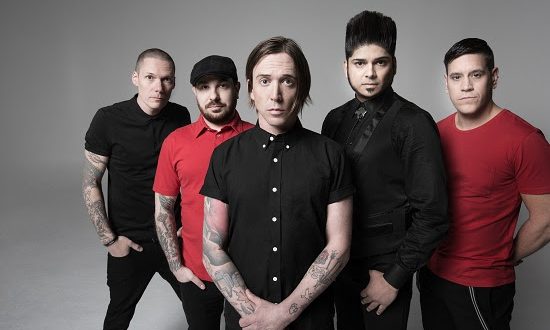 “Afraid of Heights is their most overtly political statement yet,

a highlight in the Billy Talent catalog and perhaps their best to date.” – All Music

“Afraid of Heights is how a band should mature and progress: look no further than the album’s title track and its reprise to see the breadth of what they are capable of. This is the sound of a band that aren’t hindered by limitations of what they ‘should’ sound like.” – Alternative Press

FOR IMMEDIATE RELEASE New York, NY (July 29, 2016) – Prolific Canadian rockers Billy Talent just released the Afraid of Heights studio album, available now via The End Records (US).Afraid of Heights is available in standard and deluxe versions on vinyl, CD, and MP3, and has been mastered for Klipsch Reference R6 and R6i on-ear headphones. This mastered-for-headphones album is in partnership with Klipsch and in collaboration with Grammy award-winning American mixing engineer Chris Lord-Alge, to ensure the band’s art, message and emotion translates to listeners the way they intended. All physical copies of the album include a unique download code allowing fans to access this special high-resolution, 24 bit/96kHz, mastered-for-headphones edition of Afraid of Heights.

Leading to release, Billy Talent premiered two singles ‘Afraid of Heights’ and ‘Louder Than the DJ,’ in addition to four additional instant-grat tracks with custom artwork.

Billy Talent will be performing tracks from the new album throughout their September ‘Afraid of Heights’ US tour, kicking off at Riot Fest Denver and ending at Chill On The Hill in Sterling Heights, MI. Tickets are on sale now! The full tour routing is below.

In 1946 Paul W. Klipsch, inventor, acoustics pioneer and maverick, founded Klipsch Audio with the sole purpose of bringing the power, detail and emotion of the live music experience into his living room. Through the use of highly efficient speaker designs, handcrafted cabinetry and a thirst for real engineering breakthroughs – Klipsch, the great American loudspeaker company, was born in Hope, AR. Today, our diverse range of quality audio products includes speakers and headphones for almost any consumer and professional application – including cinema, whole-house, wireless, home theater and portable offerings. Honoring our founder’s legacy, Klipsch continues to be the legendary high-performance brand of choice for audiophiles and aficionados around the world. We are the Keepers of the Sound®. Klipsch Group, Inc. is headquartered in Indianapolis and is a VOXX International Company (NASDAQ: VOXX).

Since the release of their self-titled debut in 2003, Billy Talent have cemented themselves as a generation-defining rock band.  Boasting nearly one million albums sold in Canada alone and nearly 3 million albums sold internationally, the band have seen multi-platinum certifications for their albums Billy Talent I and II and III, and platinum status for the latest studio album Dead Silence.  The band has enjoyed tremendous success at Canadian rock radio where they have had three #1 hits that combined for 19 weeks at the top spot, six Top 5 hits, and five Top 10 hits.
For more information, visit:
Website | Facebook | Twitter | Instagram