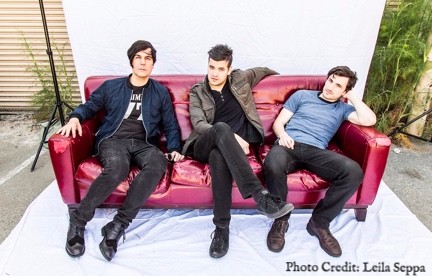 On August 19th New Diplomat will be releasing their EP titled Replaced and while it is by no means a perfect release about half of the album showcases what New Diplomat are best at which is entertaining listeners.

The EP opens with “End of an Era” which has an ambient electronic start before lead singer Horacio O’Brien – Ferres sharp voice cuts through. The verses are tight and slick and the chorus has an 80s retro feel that separates it from other tracks on the record. It is a solid number through and through, midtempo, with just enough groove to bust a move to, and believe me you’ll want to after hearing this song. Though it does have that throwback element to it it is cemented firmly in the 2016, totally radio friendly and something to blast from speakers whenever one needs an energy boost. In fact, it is arguably the best song on the entire record and sets the tone for what follows.

“Stay Up” has a dizzying electronic opening with synths blazing at full force and when O’Brien – Ferres starts to sing one can’t help but be captivated. Yet again the track is extremely infectious and deserves mainstream attention. O’ Brien – Ferres demonstrates that he is the master of his own voice, completely in control, and only using his falsetto when it feels most effective and it absolutely works. “Stay Up” has a simple chorus and that is part of what makes it so catchy, and the verses are equally appealing. It’s a toe tapping, head bopping treat from start to finish that New Diplomat should be proud of because it’s a standout on the album for sure.

Changing tones slightly is “Conversation” which immediately has a darker feel to it in its instrumentation and vocals. The verses are a little stronger in execution than the chorus and sometimes the lyrics are hard to decipher but on a whole this song succeeds by tackling a different sound and doing so with gusto. O’Brien – Ferres gives a powerhouse vocal performance that helps the track achieve a muse like effect, slower and a bit more hard edge. At over five minutes the song has the potential to drag, but it never does and much of that component that makes you want to keep listening is due to O’Brien – Ferres, in fact at times one might wish it never would end. Put it on a loop and fall into a trance with New Diplomat.

Unfortunately while half the album is stellar the other half doesn’t quite hold up as well. “Moonshot” is dull and the flat vocals do nothing for this reviewer, in fact the only thing it does is create a disconnect for the listeners. It’s not terrible, the chorus is pretty good, but it’s not fantastic either. “Ordinary People” starts off with some promise but compared to the other tracks on the album it just isn’t as good and the usual superb O’Brien – Ferres falsetto can’t save the closing track “Proxy Love.”

Still the album is worth a listen to, and New Diplomat is sure to create more and more fans after they listen to Replaced.