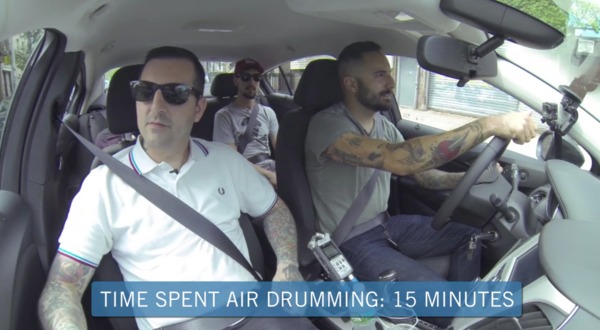 Bayside’s Anthony Raneri and Nick Ghanbarian recently surprised fans when the pair offered fans an early listen to music from the band’s seventh album, Vacancy (Aug. 19, Hopeless Records). It wasn’t just a sneak peak of the new songs, but a car ride that included coffee, shakes and apparently 15 minutes of air drumming as seen in the band’s video for “I’ve Been Dead All Day”.

The band has been consistently clever in their use of video and interaction with fans and other bands. In 2014, Raneri and drummer Chris Guglielmo produced “All Things Warped,” a video series hosted by Raneri as he spoke with fellow Warped Tour performers while Guglielmo served as on site barber.  More recently, Raneri has surprised fans with impromptu Facebook Live Q&A’s as well (facebook.com/Bayside). Bayside continue to share insights and tips from their Vacancy recording sessions as well, sharing the second clip on the collection last week:

Pre-orders for Vacancy are available now, with digital pre-orders offering an instant download of “Enemy Lines,” “Pretty Vacant” and “I’ve Been Dead All Day.” Physical pre-orders, vinyl, cd as well as various merch bundles can be found here.

Bayside’s North American tour kicks off on Aug. 11 in Ft. Lauderdale, with The Menzingers and Sorority Noise along as support for the five-week outing. Tickets are available now.