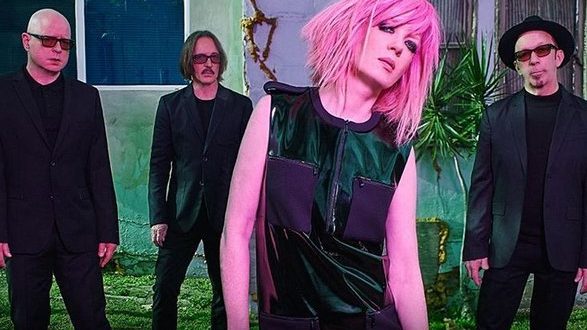 Show Review: Garbage at The Starland Ballroom in Sayreville, NJ – 7/27/16

Garbage transformed Sayreville, New Jersey’s Starland Ballroom into an edgy, underground club Wednesday night as part of their Strange Little Birds tour promoting the band’s sixth studio album. Before this review continues, it should be noted that it is impossible to do the performance justice. Garbage’s musical prowess was evident throughout their nearly two-hour long performance (even with Butch Vig’s absence), and the energy of the room was unlike anything this particular reviewer has experienced. When I say the show was transformative and one not to miss, I mean it.

The night started strong with New York’s Kristin Kontrol’s synth pop sound and dimly lit stage. All eyes were on vocalist, Kristin Welchez (Dum Dum Girls) once the first enchanting notes left her lips. Welchez exuded confidence as her voice swelled throughout the room and the room stood still in slight awe. The rest of the musicians onstage stayed relatively low energy and served as a backdrop to Welchez, who spent the set casually strutting the stage and popping her shoulders in time with the beat.

I’m not sure if it was her scrunchie-accessorized top ponytail and the way it made her look like a geisha, the originality of the band’s overall sound—or a combination of the two—but the act felt new and exotic. If the audience cheers of “Fuck yeah!” at the end of songs and the eruption of clapping at the end of the set is any indication, I’m not alone in this feeling.

As vocalist Shirley Manson herself mentioned later in the night, Garbage’s set was almost the opposite of Kristin Kontrol’s. Rather than the softly glowing stage Welchez used to her advantage, Garbage’s set was vibrant and color-filled (except for a few well-chosen moments in black and white). And where Welchez oozed sophistication and control, Manson was raw and unabashed in an utterly mesmerizing manner—the complete personification of Garbage’s nonconformist attitude.

The room exploded into frenzy once Garbage took the stage and launched into an energy-filled rendition of “Supervixen” before carrying the momentum into their next song, “Paranoid.” Bright yellow, green, and pink lights dazzled the audience they were pointed into and contrasted well with the band’s black clothing. Duke Erikson and Steve Marker were beacons of charisma throughout the set, especially during the moments of songs where the music stops for a short pause before restarting. Manson herself rocked the frontwoman persona, jumping across the stage and delivering an emotion-filled performance of the band’s newer single, “Even Though Our Love is Doomed.”

Beyond the music, there is something about Garbage that touches on the vulnerability of their fans. It’s a high responsibility, and one that the band clearly takes seriously. This was evident throughout the night, as Manson implored the audience to respect each other (regardless of their politics, sexual orientation, and more), dedicated “Bleed Like Me” to one concertgoer in particular, and expressed gratitude to a venue filled with people whose age indicated that they had grown up with the band.

The audience’s trust and the band’s care manifested itself in an overwhelming sense of unity. Strangers become family by the end of the night, softly exhaling in unison once Garbage finished the last song of its encore.

Previous Interview with Andrew Shapiro – “The only way to impress other people is to impress yourself first.”
Next California in Berlin.