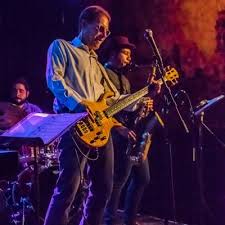 Bandleader and bassist extraordinaire Robert Miller has guided the fortunes of his New York based outfit, Project Grand Slam, into garnering one of the most impressive live pedigrees in popular music today. The band has commanded the stages at some of the nation’s most respected live venues like New York City’s The Blue Note, the Manhattan Center, and the Iridium. Their talents have earned them opening spots for multiple Grammy award winning and multi-platinum artists, but their studio accomplishments are equally prodigious. Miller’s influences are wide ranging, including a tremendous affection for fusion jazz from the 1970’s, but while he doesn’t bring that mode to bear on the band’s latest single “The Rescue”, everything Miller touches is infused with the same inspiration and daring that initially fired him as a young musician. This immaculately produced affair sparkles from first note to last with warm, robust attention to detail and a firm balance between the song’s competing textual elements.

There’s never any sense of the song lacking thanks to its instrumental status. Instead, the superb melodic strength of the instrumental voices, particularly brass and guitar, make the lack of a singer a non-issue. The guitar work strikes a startling balance between flash and understatement while the brass vocalizes over the top with a lot of fluency and verve. There are certainly faster tempos, but “The Rescue” pulses with a palpable sense of urgency from the first notes on. The best music always has a quality of musicians playing for their lives with a wide open sense of possibility and joy and the arrangement and execution of this track wholly embodies that ideal. It’s nothing short of slightly astonishing how much attack and edge the band capably deliver in such a recognizable vehicle.

Miller’s bass playing is the musical center. He’s never merely running scales in counterpoint to the other instrumentalists. Instead, he juggles serving the song while still pulling it forward with the sheer focus and will of his bass playing. Miller vigorously pursues lines to their conclusion while never laying on too many notes and thus depriving the music of room to breathe. Virtuoso talents walk a careful line. Their playing can dominate a track and wow listeners with its technical skill, but such performances are rarely remembered. The players who find their own way to shine within the existing confines of a performance and concentrate on connecting with their audience are the performances we collectively remember.

Project Grand Slam’s forthcoming studio album promises to be a doozy. As the first single reveals, this musical outfit continues maturing into a fluid articulation of various styles with a common reference point. Listeners are placed in the loving hands of virtuosos and they carry off their mandate beautifully and with great aplomb. Robert Miller and his cohorts in Project Grand Slam will wow many with this song and it promises even more greatness to come.