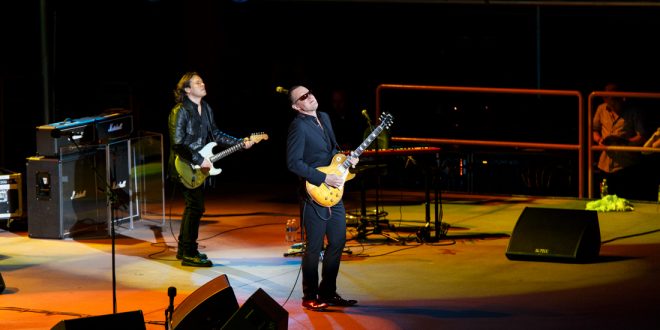 Joe Bonamassa returned to Red Rocks for the third time last week over the past three years, after a red hot sold out tour across Europe. The stop in Red Rocks attracted Bonamassa fans from all across the nation, as it was his only tour stop on United States soil for the British Blues Explosion Tour. Bonamassa paid homage to Clapton, Beck and Page playing songs from their catalogs that fans had never heard before.

Thunderstorms with heavy rains and lightning didn’t stop Bonamassa. He quickly extinguished the rain and lightning with his fascinating rendition of Beck’s Bolero. Bonamassa’s jaw dropping guitar playing set the crowd in an uproar. The setlist for the evening was magical… including hits like as Led Zeppelin’s “Tea For One”, Eric Clapton’s “Motherless Children” and Cream’s “SWLABR”.

One that is still stuck inside of my mind, with no chance of escaping is his cover of Pretending. I felt that Joe nailed this one out of the park, as his voice shined and it may just have been his best performance of the night vocally, sending chills directly down my spine.

In addition to the British Blues Explosion set, Joe played an additional four song encore featuring material from his normal tour. For the encore, he brought out his famous horn section featuring Paulie Cerra on saxophone and Lee Thornburg on trumpet. Together they played “This Train” and “Mountain Climbing” off Bonamassa’s latest studio album, Blues of Desperation. Last but not least, the final song played at Red Rocks this magnificent evening was Sloe Gin. It is one of Joe’s most well-known numbers and definitely a song you need to check out on YouTube if you haven’t seen him live before. You’ll be amazed, guaranteed.

Joe Bonamassa will be hitting the road in the United States this fall, along with many other tour dates scattered across the globe. Check out his tour dates, you will not be disappointed… Trust me.

Resident Music and Photography addict from Northern, New Jersey.. USA. Got into both music and photography at a young age.. it's been history since!
@billtnj
Previous Gallery: The Color Morale on Warped Tour, Holmdel NJ 07.17.16
Next ALTER BRIDGE – Launch Preorders For New Album “The Last Hero” & Premiere First Single “Show Me A Leader” Worldwide!