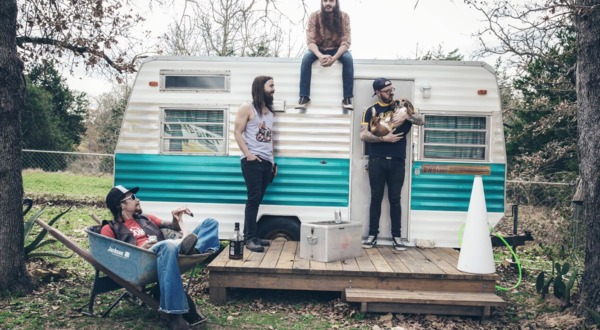 Dads Dominate the Video for Crobot’s ‘Not For Sale’: premiering on Wall Street Journal

“Crobot deliver some seriously funky hard rock, but they’re having a good time doing it. Just look at the video for their single “Not for Sale” (below), which debuted on Speakeasy.

The video, directed by veteran helmer Dan Packer, was inspired by the band joking around in the studio, when they were recording their upcoming album, “Welcome to Fat City” (out Sept. 23 from Wind-up Records).

There’s a line, often repeated in “Not for Sale,” which goes, “Who paid your debt to be here?” However, according to singer and lyricist Brandon Yeagley, the band and their production partners thought it sounded more like, “Who paid your dad to be here?” Engineer Alan Moulder (Nine Inch Nails, Them Crooked Vultures), who mixed the record, had actually thought that’s what the band was singing the whole time, Yeagley says.

So the Pottsville, Pa., rockers saw the lyrical mixup — which is in the tradition of “bathroom on the right” and “Hold me closer, Tony Danza” — as an opportunity to have some fun with a video. “We try to make fun of ourselves any chance we get,” says Yeagley. “We said, ‘You know what, we’re going to beat everyone to the punch on this joke.’”

The result: The video shows Crobot – Yeagley, guitarist Chris Bishop, bassist Jake Figueroa and drummer Paul Figueroa — playing “Not for Sale” in an impromptu show for a mob of dads. How did the video’s makers go about rounding up so many dad-like men? Yeagley says the director told him it’s not as hard as one would expect.

The kind of sense of humor that led to the creation of the video extends to much of what Crobot does. Yeagley says his work is informed by the tongue-in-cheek humor of “The Hitchhiker’s Guide to the Galaxy” author Douglas Adams, who died in 2001; and the gonzo antics of Hunter S. Thompson, who died in 2005.

Yeagley is also a fiction writer at heart. He’s working on a graphic novel that could be released late this year or early next year, while he and the band have constructed a fictional “Crobot universe.”

“I’m not the kind of guy to wear my heart on my sleeve or sing about breakups or anything like that,” he says. “I always found it’s much easier for me to let my feelings come out through these characters and stories.” – The Wall Street Journal