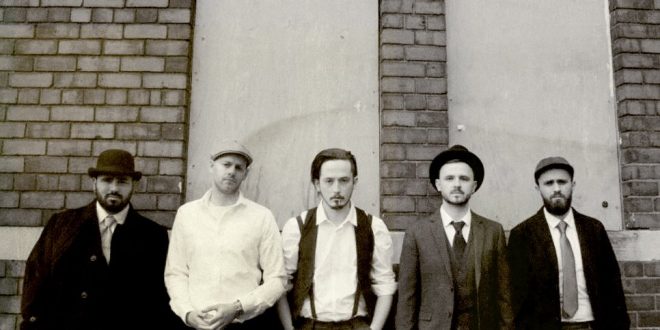 Nearly four years ago, South Wales’ own Calling Apollo was acquainted by an Internet music forum. All of its members had honed their chops in previous bands, greatly expediting the transition. Nonetheless, the Cardiff quintet charmed U.K. underground crowds with their progressive rock sound, as well as their equally prioritized touring and recording ethics. Following 2015’s Hunter|Gatherer EP, the band forged a brand new path. They went on to not only earn critical favorability among alternative press, but considerably tighten their kinship with one another.

With kinship came inspiration. And that inspiration bred the first of a two-part concept, The Great Depression: Act I. This is a vastly improved effort in terms of production and songwriting. While I appreciated the mostly post-hardcore feels of the last EP, this one presents a certain pronounced atmospheric element to complement that energy. Previously explored themes—particularly, the twisting of media, and the struggle amidst a distorted society—are kept intact, even if indirectly. At the same time, Act I’s album art somehow marks a change in the concept’s setting, from wooded to urban civilization. But what also works to the benefit of this new chapter is a sense of patience, as well as humility, which carries the album six songs strong.

The first track, “Light the Way,” is initially defined by two dripping patterns: one is close, thin and constant, the other distant and every so often, as if to create a mental blur. Those distant drips become a metronome for the guitars, which blast the listener from a lull into a bleak reality. Usually with this type of “stick it to the man” concept, the anger registers almost immediately which, if utilized poorly, can prove unnerving. In the case of vocalist Christian James Neale, however, I was impressed. Once he came to the build before the first chorus I was immersed in the emotion. His voice has an elastic feel in that he can shift to a louder tonality without strain. This effectively enhanced the song’s message; that is, achieving a mindset of determination that allows one to plow through strife. Up next is the first of the EP’s two singles, “Clone City”. There’s an immediate sense of command, in part from the integration of textural layering by guitarists Kevin Williams and Dan Hughes. As the song picks up, the straightforward aggression that defined the last EP makes a welcome return. Neale’s unique scream—more akin to a grit-tinged yell—gives life to the already intense instrumentation. I liked how the chorus was utilized throughout the song. From my perspective, Neale notes the impact of a personality cult—how authoritarian and one-sided beliefs merely create homogeny—boldly stating “We are a product of you” at each end. A subtle element of the chorus is its backing harmonies. When put in its context, they play as a unified group of disenchanted individuals who are eager for change. “Obelisk,” the latter of the two singles, feels like a solid B-side. It maintains similar confidence, aggression, and melody, while the first half of its chorus (“If you look beneath the opulence/You will find out everything”) gives clearer insight into the EP’s concept. One particular element I considered most effective was the buildup beginning at 2:37. It contains a wispy, soulful hum that briefly changes the song’s vibe. It isn’t until that element is brought over to the 3:48 mark that it especially shines. At this point the direction becomes more metal inspired, to which that hum provides a blatant—and all the more impactful contrast. The deepness of the bass is equally important in emphasizing the thickness to the song’s newly dominant metal edge, aptly closing the first round of songs.

From the second half of the EP, “The Wars” brings with it a momentary calm. As a large part of its structure consists of clean guitars, this sense of pace is rather refreshing. There’s a competent use of delay in their delivery, as it helps convey a sense of retrospect to the scars—physical and emotional—acquired through time. The buildups in the song are also uplifting speaking of holding together in trying times, and the positive impact that comes with it. And that’s not to take anything away from the capabilities of the darker, overdriven songs. I was surprised by “Act I: House of Cards” being at this particular point, as it actually sounds more natural at the start of the EP. Nonetheless, its intro hooked me in instantly, which might have actually proven useful with its being at the start instead. I was able to envision the foundation of a card house not only come down, but come alive, to the point of forcing a hasty retreat. The lead part of the intro’s up-tempo half is a peak of the band’s abilities, although by the chorus, the song is poised to be a hit. The final track, “…And the High Plateau” is by far the most developed and heaviest of all. It starts out with a rich, low-key acoustic chord sequence, helping supplant the process of having rummaged through war-torn remnants. The mood presents a type of uncertainty, whether to smile and call victory or prepare for any sudden danger ahead. Amidst this progression, Neale’s voice is especially raw, almost to the point of being in pain. A grunge-driven arrangement reinstates that feeling, only now with a newfound revitalized quality to the delivery. After briefly shifting back to an acoustic feel, the melody begins losing signal, giving the song a false close. What actually results, though, are charged metal riffs that elevate the ultimate goal—eliminate corruption for good and replace it with love. The vibe undergoes yet another shift, this time to a pounding thrash riff that plays through the remainder of the song. There’s an unexpected jump fade near the end, which brings with it eerily faint footsteps. But the cap of sorts to this first act is a 78 record playing “What a Wonderful World of Mine”—a normally pleasant song that steadily decreases in pitch, to equally eerie effect.

Overall, The Great Depression: Act I is, indeed, a great leap forward for Calling Apollo. This EP gives rise to substantial stylistic expansion, variety, and ultimately, conceptual maturity. The track sequencing toward the end had surprised me in the least, although it actually flows the way it should in the long run. Even though the EP still has a while before its release, I’m already looking forward to what’s in store for Act II!

I come from a family who is passionate about all things music. I learned to sing at an early age, and by 13, had my very own Fender Strat guitar. I tried my hardest at learning all that I could. Because I was born with cerebral palsy, I had to teach myself an adaptive playing style. I learned to write and record my own music, despite these difficulties. In college, I started making great use of my writing abilities by reviewing music, as well as copy editing. I guess it's best to stick with what you know, while welcoming a fair challenge at the same time.
Previous Gallery: Vanna on Warped Tour, Holmdel NJ 07.17.16
Next Album Review: Crown The Empire – Retrograde