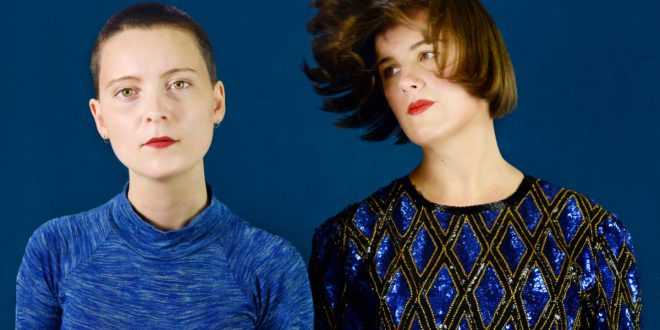 Olivia Hally and Pepita Emmerichs, better known in the music world as Oh Pep!, released their latest album Stadium Cake. It may not be a LP for everybody, but if you listen hard and search long enough there are some gems to be unearthed.

“Wanting” sounds like a something a siren would sing and Hally’s ethereal voice definitely helps contribute to that siren feel. “I went on down to the rocky shore/you were standing in the water wanting more,” she sings and when she reaches for her falsetto it is pure gold. There’s a little bit of a Laura Marling sound here but Oh Pep! definitely make this song their own. It is full of instrumentation that never overpowers the vocals but help make it a dynamic song. There’s not one moment in the track where the music isn’t complex and the mixture of that with Hally’s pure voice is one hell of a combination and helps make it one of the standout tracks on the album.

Immediately following is “Crazy Feels” another treasure of a song. “You have to do what you have to do to make it easy for you,” Hally sings plainly but also with a rich tone. It feels like the brainchild between Ingrid Michaelson and Tori Amos, Hally’s vocals never sounding as good as on this tune, especially when she reaches for the falsetto which she does sparingly and at just the right moments. The song in its content is something that many listeners will be able to identify with and it’s such a pleasure to listen to that consumers will want to put this particular track on repeat immediately after the first listen, it’s that good. And unlike other songs on the album, despite the slow pacing and being over four minutes, it never feels like it drags.

“Trouble Now” boasts the best harmonies on the entire record with sweet vocals that match lyrics like “I wanna be wherever you will be but I can’t right now.” Hally delivers a strong vocal performance here that matches the driving percussion throughout the track. The chorus and verses work together perfectly to deliver the message of the song and it never strays too far away from Oh Pep’s sound, even if the sound is a bit more full than most of the songs on the album. Not the best on the LP but still really good.

The uptempo “Seven Babies” is unlike anything else on the entire record. It has a 60s retro feel and a killer upbeat chorus that verges on rock n’ roll territory. Its pure pop perfection with Hally pulling out all the stops to tell the story she wants listeners to hear. The throwback quality to the tune elevates it immediately and with an intricate instrumentation that Oh Pep! are known for, and the layering of the vocals on top of one other especially on the last stretch of the song, it all comes together to make the tune the best moment of the whole EP. It’s one that you’ll be bopping your head along to, which is something that you won’t find on any other song on Stadium Cake.

The problem with the album is that more than half of the songs hit a snag somewhere. The opener “Bushwick” falls flat with its monotone vocals, “Only Everyone’s” constant shift in sound is a little manic and may be hard for listeners to digest, “Doctor Doctor,” despite being only a bit over three minutes long, drags and while “The Race” has some clever lyrics it is easily lost in the shuffle of better songs.

But don’t give up on the album, keep listening and one is bound to find something they can take pleasure in.

retro music enthusiast. Dreamer. Kind of odd. Writer
@twitter.com/for_no_one1014
Previous Gallery: The Wind and The Wave at the Duck Room at Blueberry Hill in St. Louis, MO on 7.19.16
Next Gallery: From Ashes to New on Warped Tour, Holmdel NJ 07.17.16