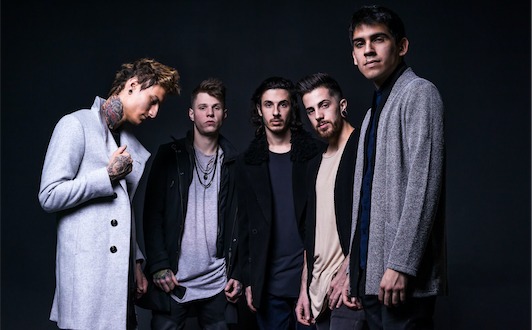 Two years ago, Crown The Empire released The Resistance: Rise of the Runaways on July 22, 2014. Within a short amount of time, the concept album broke into the Top 10 on Billboard’s Top 200 chart. Now, Crown The Empire embarks on a new era: Retrograde. Despite the title, Crown the Empire seems to only be moving forward with their music and persona.

When listening, Retrograde immediately has a different atmosphere than The Resistance. The “runaways” theme is not as heavy-handed this time around, which can be considered a positive or negative factor depending on how someone felt about Crown’s previous album’s concept and narrative. It appears that the band is trying to change their marketing strategy, attempting to target a wider, possibly even older audience with Retrograde.

The opening track, “SK-68,” is well produced and extremely well thought out. With ambient instruments and nearly angelic vocals, the track sounds as if it can used as the opening sequence for a moving video game or movie. Following “SK-68,” is “Are You Coming With Me.” Out of all the tracks in Retrograde, this track is probably the most reminiscent of The Resistance. At the same time, “Are You Coming With Me” also seems to have musical influences from other musicians, such as Bring Me The Horizon during their “That’s the Spirit” era.

Overall, Crown The Empire’s instruments and vocals have grown and matured since The Resistance. Retrograde brings out an energy that will undoubtedly be phenomenal live.