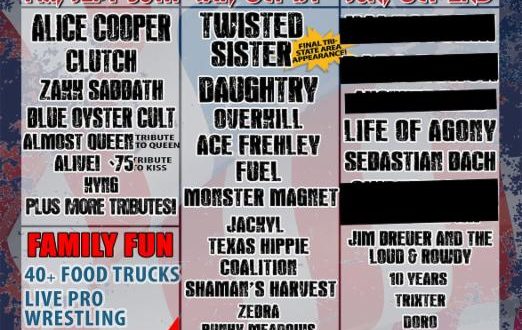 The second annual ROCK CARNIVAL returns with another stellar line-up of the biggest names in entertainment. The main event will take place on September 30, October 1 and October 2 at its new location in Lakewood, NJ at FirstEnergy Park, home of the Lakewood Blue Claws.

As with its inaugural year, which drew a staggering 50,000+ attendees, the second annual ROCK CARNIVAL will feature classic amusement rides and entertainment, the most delicious food truck offerings, high-action Professional Wrestling, a wide selection of tasty brews, and of course… the best in local, national and international rock music performances! This year’s event will also see the addition of more carnival area space and a children’s fun zone. This is a weekend of big fun for the whole family!

See below for the current line-up, with more artists being added leading up to the main event. Stay tuned, Sunday’s headliner will be announced soon!

The ROCK CARNIVAL is produced by Stan Levinstone Presents and GameLoud.