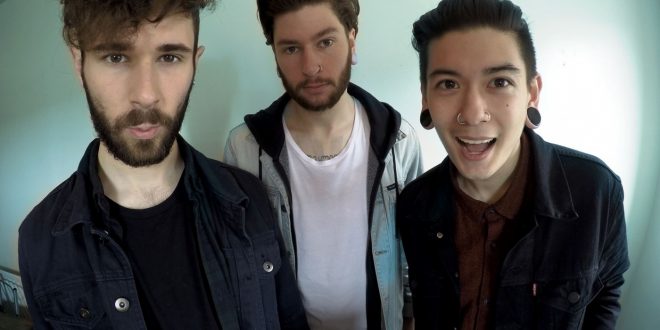 Album Review: We Are Carnivores – Theodor’s a Don, Bro EP

We Are Carnivores are set to unleash their quirky, math-punk style this Friday with their EP, Theodor’s a Don, Bro. Composed of four shorter tracks, the EP is self-recorded, self-produced, and self-released. It also represents a mishmosh of elements that accumulate into a brash, in-your-face attitude.

Based in Nottingham, UK, We Are Carnivores consists of Harry Christopher, James Pickersgill, and Beu Smith. All three lend their vocals to the tracks, with Christopher and Pickersgill on guitar and Smith on drums.

If the EP’s song titles alone don’t point to the trio’s eccentricity, this quote from the band’s bio should put things into perspective:

“Having almost caught the Loch Ness Monster with nothing but our charm and a bag of quavers while touring the ‘Tex-Mexiconomy EP’ in 2015, we are hoping ‘Theodor’s a Don, Bro’ coaxes a whole bunch of mythical creatures out of the woodwork towards the back side of summer 2k16!”

Right… In terms of sound, Theodor’s a Don, Bro is characterized by angular guitar riffs, time changes, and breakdowns. These elements are then interspersed with vocals that vary between singing and screaming. The two vocal styles come across as split personalities caught in a duel with one another.

This feeling is especially strong around 1:20 in the first track, “I’m Not an Alcoholic, I Just Collect Bottles,” where the trio spits out punchy lines on top of chaotic guitars. The voicemail sequence in “Scottish Power” further builds this slightly unstable emotion. While these elements are high points on the EP, the piece as a whole does seem to miss a beat.

On the one hand, listeners could feel like they don’t “get” the music. On the other, they could feel as if they understand it a bit too much. In this case, the EP might fall flat in its reckless desire to be free of constraints, while simultaneously being weighed down by the sheer number of components thrown into each track.

When it comes to this reviewer, it feels as though We Are Carnivores are missing the term “self-edited” in their list of achievements for the EP. The vocals are tight and the instruments technically solid—all that’s missing is the smidgen of restraint that could have carried Theodor’s a Don, Bro from an ironic mix to something destined for constant replay.

For now, it feels as though Theodor’s a Don, Bro speaks to a specific niche of listeners who want to blast something mildly abrasive but also slightly good on their car stereo. It’s a contradiction, but then again, maybe that’s what the band is going for. After all, these three will never be accused of the sin of taking themselves too seriously.

Want to know more about We Are Carnivores? Check them out at the following links or on one of the tour dates listed below.

We Are Carnivores Tour Dates

Previous Interview: BLAJK
Next Gallery: Clean Spill at The Studio at Warehouse Live in Houston, Texas 7/19/16