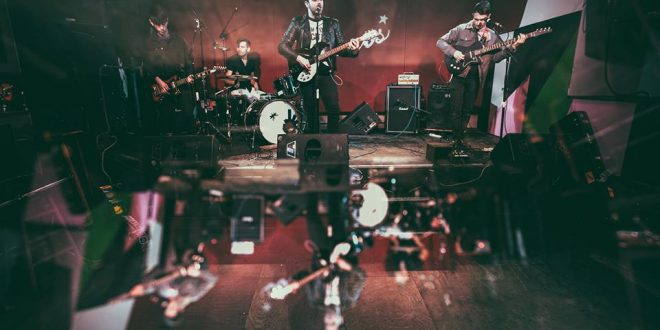 1.This is your first official tour. How did this all come about?

Tommy Shears – Our management kind of reached out, actually two weeks ago today, saying Wolfmother is on tour with Guns n’ Roses and they want to do three shows on their own and they’re looking for openers can you make it work? And that’s about it. We love Wolfmother. We definitely want to play more out of Wisconsin so we made it work.

2.How has tour life been so far?

Alex Thornburg – Well, it was a pretty long drive the other day. We drove from Milwaukee to Chicago to pick up Zak (Rickun) and then we drove all the way to New York City. We left around seven in the morning showed up around two in the morning, you can do the math. I actually woke up around three in the morning today. I flew here because I’m not an idiot.No, The rest of the band was kind enough to bring all my stuff so I can’t be too mad. I had to work. That’s my excuse.

Shears- We held all the gear. We slept in a sweaty airbnb last night. The van smells already. It is musky in there. But it’s good.

3.This is your third New York show in one year. What’s playing in New York like for you?

Zak Rickun- Playing in New York is really awesome because I have a lot of friends here. These guys get upset with me because I have friends here [laughs]. No, but it’s a great place to play. There’s so many people here who actually care about music and support live music, unknown bands.

Shears- I feel like a lot of our favorite groups came from New York so when we’re walking around we’re like ‘The Strokes played there back in the day.’ Knowing the history of these places we play and just kind of knowing we’re following in their footsteps is kind of cool for us.

Thornburg- We just saw a toilet that allegedly David Byrne [of The Talking Heads] took a shit in.

Shears – You can strike that from the record. No, but it is true.

Thornburg – We just had a huge tour of Webster Hall and there’s a huge ballroom above where we’re playing [the Marlin room] and that’s where they used to do live studio recordings for the albums back in the 40s and 50s. Elvis Presley recorded here, Iggy and Bowie were here.

Shears – There’s four different venues here and just some incredible stuff, we had no idea. This is probably the most historical show we’ve played

4.Can you talk about the evolution of your latest single “I Never Asked?”

Shears – [Drummer] Chris [Morales] came to us with an idea, most of the lyrics were his, and we’d been playing it for a little bit and knew that we wanted to do something different with it. Most of our other stuff had kind of been roll and tumble rock n’ roll stuff and we really loved this Arctic Monkeys record AM, [and thought]’What if we took those sounds as inspirations?’ So we went with that. I added in the guitar riff that starts with that Zak now plays and we worked with a producer who really helped us take it to the next level and helped us put in a new chorus. I think it’s a really tight song.

5.It’s a little over half the year now. Do you have any favorite songs or favorite albums of the year so far?

Shears – I really like Brian Fallon’s new album Painkillers. I was lucky enough to see him this year and see him play a lot of songs off of that one. Otherwise, this is a little bit out of my wheelhouse ,but I recently heard “Good Grief” by Bastille and I wouldn’t consider myself necessarily a fan of their older stuff but I heard that and was like ‘Wow this cool.’ The new Wolfmother disc is pretty cool too and I’m not just saying that.

retro music enthusiast. Dreamer. Kind of odd. Writer
@twitter.com/for_no_one1014
Previous KY has something more than College Basketball, we give you YungPre
Next Gallery: Feine Sahne Fischfilet at Two Days A Week Special 2016 in Vienna, Austria 6/7/2016