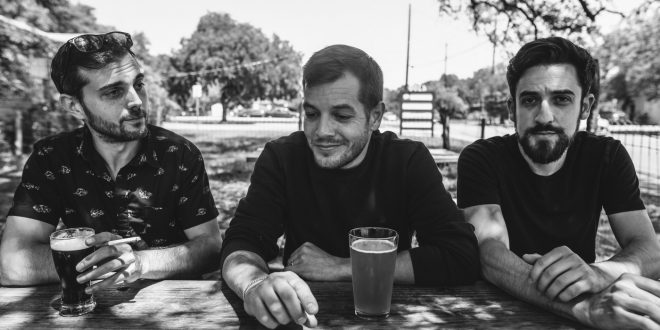 On August 12, the band will release its debut album, Everyone’s OK. Production duties are once again handled by Chris “Frenchie” Smith and Peter Katis, who had championed their previous EP to critical acclaim. Additional veteran producer Joe Hardy transforms the album’s presentation, utilizing what the band calls a “unique and fearless mixing style. Together, this six-member collaboration boosts the album toward peaking sonic as well as potential.

“Cold,” the album’s opener, goes in an interesting direction as if the band’s hard-edged blues sound is somehow taking flight. Leibovitz’s lead guitar melody is the first element I focused on. It is graceful, almost moth-like, fluttering continuously around the track. Underneath this is a bed of smooth bass and snapping percussion by which the guitars are propelled. Lyrically the song is simple and catchy, each group of lines representing a cyclical pattern of emotional defeat. I found this to work exceptionally well. Not only are listeners treated memorable vocal hooks, but also hazy, electric undertones that increase in prominence as the song progresses. Picca’s harmonies have a subtle chorusing nature about them, and the added reverb makes everything hold nicely. Next up is “Childish Blues,” lifted from the Little Rock EP albeit a much cleaner mix. In fitting with the album’s concept, it establishes consistency with life’s common predicaments. Specifically, the unnecessary dwelling on unrequited love, while life is otherwise generally positive in the broadest sense. There’s some serious rocking here at its finest. Fuzzy riffs are interchanged with power chords from verse to chorus, with a pleasant sheen from the effect achieved from the singers’ muti-layered vocals. During the guitar solo, an interesting panning effect is integrated, in which the backing reverberated textures help elevate the notes. It then deconstructs into a straightforward, unabashed jam session for the remainder of the song. “And We Don’t Know” addresses the heart-flipping anxiety from an empty gas tank, and painstaking hours having accumulated without headway. The song packs in multiple influences for its short length—part punk rock, part swing, even industrial at times—and all pertinent to that extent of stress. Through these stylistic shifts is a building chorus, (“And we don’t know if anybody’s coming”) sung in quite a Beatle-esque fashion. That particular aesthetic is a suitable fit on “Little Rock,” the latter track lifted from the EP, wherein the mind drifts from a state of anxiety to one of numbness. That stinging main riff utilized between phases is ideal in conveying the mood. Paths diverge, and coping mechanisms (smoking, in the case of the lyrics) have proven ineffective, the remaining option being to stay patient. Eventually, near all-nighters become commonplace to the point of temporary mental collapse. However, once the subject of the song regains familiarity with his surroundings, he proceeds onward by himself and strives to return home.

From the midpoint of the of the album, “When You Were Young” plays like a short-lived reunion with the subject’s partner. Prior to that, he states that he misses her, and that very little has changed from the time they were together to when they split. But even after she had gone through the trouble of reconnecting with him, he figures that her gesture was out of mere courtesy, and suggests that she leave him once again. In the track to follow, “Jackson,” it is revealed that the proximity to home is becoming progressively clearer. This is the only other track with raised momentum, although its 70s rock vibe represents another critical moment—not by way of stress, this time around, but eustress. With every ending chorus, a sustained layer of feedback suggests a closer path. The latter part of the album is akin to a state of rest and reflection, beginning with the title track, “Everyone’s OK.” By this point, the band begins to showcase more alternative sounding chord sequences, rather than blues. I instantly took a liking toward its shifting from jangly to distorted textures and back. The lyrics of the song are simple and catchy once again, evoking a desire to be to oneself, but their delivery is especially worthy of mention. It is the clever placement of reverb—subtly on each verse line, explicitly on each chorus—that encapsulates the song’s meaning, as well as makes it a worthy follow-up single. The penultimate track, “Mila Says,” is an endearing ode to a close friend; one to be trusted in such a way that every verbal exchange is solely between you and them. With such a bond comes the acceptance of one’s personal quirks (“Mila says she doesn’t understand/Why I leave, just because I can”), as well as the assurance of keeping secrets (“Mila says she won’t tell anyone about me”. It’s no wonder this was chosen as a single, given its digestible hooks and radio-friendly pacing. “Home” is the final track of the album, epic as much as it is poignant. Not so much in conveying the conveniences of familiar surroundings, but just how foreign and otherwise risky it is to venture out of a comfort zone. Both clean and distorted guitar textures add substantial clout to the song’s message, which is solidified each time ‘home’ is sung in harmony. The guitar solo also contrasts greatly with those of previous tracks, consisting of several melodically sustained wails, rather than an improvised collection of notes. The ending of the song has the right amount of resonance and closure, feeling rightfully full as the song fades.

Overall, Everyone’s OK is Courtesy Tier’s wholly sufficient transition into a long-form concept. Its down-to-earth portrayal of the human experience is seasoned with insight, not to mention a ton of heart. The two songs lifted from the previous EP make sense in their placement on the album, and the pacing of its presentation is boldly demonstrated. Come the album’s release, fans will be pleased to witness just how much the band has matured.

I come from a family who is passionate about all things music. I learned to sing at an early age, and by 13, had my very own Fender Strat guitar. I tried my hardest at learning all that I could. Because I was born with cerebral palsy, I had to teach myself an adaptive playing style. I learned to write and record my own music, despite these difficulties. In college, I started making great use of my writing abilities by reviewing music, as well as copy editing. I guess it's best to stick with what you know, while welcoming a fair challenge at the same time.
Previous BLACKFALL, Featuring Randy Weitzel, Release Official Music Video for “This Hell”
Next Lit Soul Releases Official Video for “Eternal”